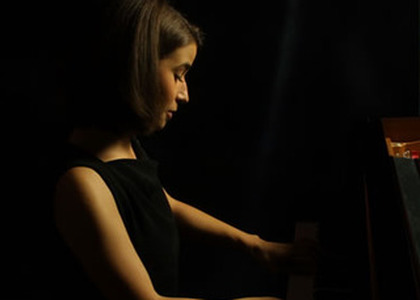 Sunday on 8 March 2020 the pianist Mara Dobrescu returns on the Radio Hall stage for "Amoroso-Martisor concert" event which is part of the series "Romania Musical Radio Concerts". Next to Mara Dobrescu, the violinists Sarah Christian and Răzvan Popovici will perform the works of some composers like Wolfgang Amadeus Mozart, Ludwig van Beethoven, Robert Schumann or Maurice Ravel. In the second part of the interview for Romania Musical Radio, the pianist Mara Dobrescu told us about the important aspects of the performing career.

Besides the French scenes you had concerts and recitals in countries like Germany, Russia, Japan, Australia, Argentina or the United States. What does the performing life involve at international level?

The musician is in the best shape when he travels and, sure, we are always between two concerts, two cities or different countries with a lot of scores on the mind. A performer is, in the first place, a tired researcher. As Lipatti said, the performer searches for the seed of truth. It is a very rich life, full of meetings with musicians, composers, with the audiences everywhere. French people say- I like this sentence very much- that "les musiciens sont les maîtres du temps" and it is true that we have a very special relationship with time, but sure, we have to find a balance between the way of finding a repertoire which he wants to share with the public, what public, where exactly..Of course all these questions are very important and everytime I like to choose the program thinking of what place, what country, what public I will address this to. And I find this to be a little special attention each time.

The meeting with the master Laurent Aimard was essential in this point of view. I worked a lot when I was at the Conservator based on the scores of contemporary music. I even had the chance to have a masterclass with Gyorgy Kurtag with the works written by him and I met a lot of composers during my student years at Paris with whom I collaborated. Even one of them, Oscar Strasnoy, dedicated to me a series of piano songs. I believe that it is the performers' mission to perform the music of their time and because of these meetings with Pierre Laurent Aimard, with Kurtag, with Oscar Strasnoy and a lot more I found out how fantastic it is to have the opportunity to work these scores written today and to create a work at the first hearing. The relationship actually between the composer and the performer is very important.

Until this moment you have already released a few CDs which contain music from Romanian and Universal works. What do you take into consideration when you explore a sound universe in the recording studio.

I like very much this recording moment, when you decide to leave an interpretative mark, a picture, let's say, of what you want to transmit throught your art. The choice of the repertoire you are going to record I think is very important. It is a different experience from a live concert when, sure, a lot of parameters interfere- the acoustic of the room, a piano you don't know, the hour of the concert, even the public's reaction. On the other hand when you are recording you go into a deep state of instense quest and time stops and after all this time of preparing the recording during the recording things transform themselves. I always try with the sound engineer to keep the spirit of the live concert. Actually, the recording happens making a string shaped as a recital so when the public listens to that CD to have the impression that they are in the concert hall and the artist's energy and this spirit I was talking about to be found in the recording. And it is very important to know how to deal with your physical and mental energy during the recording and because of this reason the relationship with the artistic director and the sound engineer must be one of trust and sincerity.