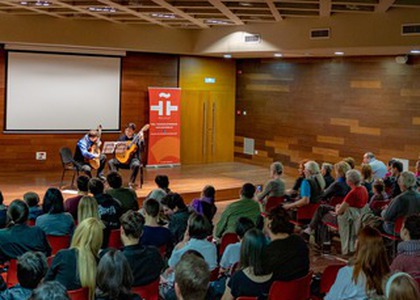 On the 24th of February the Cervantes Institute in Bucharest initiated a unique collaboration with the National University of Music Bucharest. Monthly, a series of guitar recitals will be organized in the Auditorium Hall of the institute, free admission. Where did this idea come from?

It is an idea that we have been thinking about for a long time, especially considering the experiences we had in previous years, when, inviting Spanish guitarists, who afterwards held masterclasses at the National University of Music. I talked with Mr. CătălinȘtefănescuPătrașcu and they received with great joy our proposal to host these recitals. Here, the first one already took place on the 24th of February, with Iosif Constantinescu and Ovidiu Andrei Pintilie. In March the program is dedicated mainly to Cuban composer Leo Brouwer, who turns 81 in March. And, after that, we will host two other recitals, in April and May, and we will resume in autumn, but expanding the area not only in terms of guitar recitals, but also other instruments.

What other performers will be invited to future events?