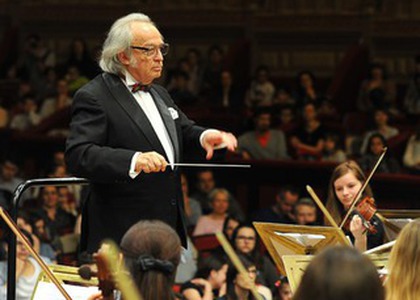 On Saturday, the 7th of March 2020 at 11 am, the Orchestra of the National College of Arts "DinuLipatti", conducted by NicolaeRacu and Andrei ŞtefanRacu, will hold a concert which is part of the series "Classic is fantastic - how to understand music" at the RomanianAthenaeum. The program includes works by Ludwig van Beethoven, PyotrIlyich Tchaikovsky, Johann Sebastian Bach, GrigoraşDinicu and George Enescu. The jazz singer Irina Sârbu will be a guest. This event is dedicated to conductor NicolaeRacu, who turns 75 years old on the 8th of March. In the following interview, you will listen to conductor NicolaeRacu.

I want to wish you happy birthday and many years as a conductor! Out of your 75 years of life, over 50 you have dedicated to music and the training of young musicians. How do you see the evolution of this long career?

As a continuous, permanent work, carried out mainly at the National College of Arts "DinuLipatti" now, an activity that has been carried out for 52 years. And the main activity, which I carried out within the National College of Arts "DinuLipatti", was materialized by the formation of several thousands of instrumentalists, some of them of absolutely remarkable value. I would name Mihaela Martin, Liliana Ciulei, Iosif Ion Prunner, Cristina Anghelescu, IoanaGoicea, ViniciuMoroianu, Roxana Gheorghiu; concertmasters at various orchestras in the country and abroad, such as Lorenz Năsturică in Munich or Bogdan Zvorișteanu at Swiss Romande in Switzerland, Adrian Florescu at Radio... I also spent a long time as a teacher at the Military Music School, where we have trained generations of music officers, teaching conducting. I think that there are about 30-40 colonels who are music officers now.

It's a pleasure to remember that a few years ago, when I was a student at the National College of Arts "DinuLipatti", I also performed in the vocal-symphonic concerts conducted by you. What should be kept in mind when working with high school students?

First of all, when they come to attend the orchestral course, they are usually quite well prepared instrumentally, but they do not know how to perform as a whole. It is a very complex activity. The student has to know his part very well, but to be careful, to help the others, the voices that have to come out and, in any case, the science of performing in an ensemble is different from performing alone.

In addition to the anniversary given by the immediate proximity of your birthday, the concert on the 7th of March will be part of the "Classic is fantastic!" series, a project that you have been collaborating on for a long time. What does the "Classic is fantastic" project mean to you? And what role does it play in stimulating the taste for culture among young people?

I think its role is huge. It is musicologist Cristina Sârbu's idea; I think that for at least 10 years this project has been carried out and it contributes absolutely and essentially to forming the concert audience, the taste for music among the young generation. And it is absolutely extraordinary! During this concert, in the context of 250 years since Beethoven's birth, the fourth part of Symphony no. 5 and the Egmont Overture will be performed. In the context of 270 years since Bach's passing, two Bach fragments will also be performed. It's about celebrating music and honoring our great composers.