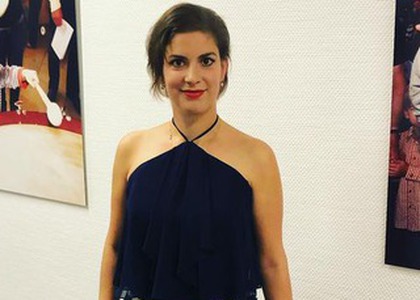 Interview with violinist Ioana Cristina Goicea, professor at the University of Arts in Vienna

The violinist Ioana Cristina Goicea, winner of Queen Elisabeth Competition in Brussels, announced on social media that she has become a professor at the University of Arts in Vienna. The artist started her work on October 1st, on the first day of the academic year.

Over the years, you have built a career on an interpretive plan. But you also have taken master's courses. How did you decide to take this step towards pedagogy?

It is not something of yesterday, of today. It is something I have dreamt about for years.I knew this would be part of my life, that along with solo and chamber concerts, I would teach. I knew this for a long time. I have simply a passion for teaching and I think this is the most important thing because everything we are doing we must do with passion and dedication and then it will be good.

What specifically drew your attention to pedagogy?

I like to help the others with everything I have received in the past from my teachers, from home, from my family. I like to pass on everything I have received and be able to help the others because I have had some extraordinary opportunities in my professional life. That's why I believe the new generation has also the right to be given the same confidence and support, and this is what I want to do.

The University of Arts in Vienna is one of the most prestigious institutions dedicated to music. Given this fact, I am sure our listeners want to know how the evaluation and examination process for this position has gone?

First, I should say this is an honor. This is something extraordinary for me, to be given this opportunity at the age of 27. So it was, simply, a very long process, as it is generally in teaching positions. Actually, it is a process which lasts longer than a year. So, since I signed up last year, in 2019 and until I received the invitation to participate, it took almost a year. And then the COVID crisis started and all the concerts were rescheduled, included this competition which took place later than it should have been planned. Of course, until I was able to personally go to Vienna, knowing there were the travel restrictions, as you know, it was a long process. But now a dream has come true for me and I am very happy.

How will you try to maintain the balance between the two vectors, the soloist life and the professional one?

First, I should mention this job is exactly what I have wanted. It is a part time job and of course the university wants very much for me to sing and this is very important for them, the university itself being represented everywhere through concerts. So, there won't be fewer concerts because of this, but I am going to move to Vienna and given this reason, of course, it will be easier for me to be able to do the lessons exactly as they should be, and when I am gone for a few days for my concerts, it will be as it has been until now. So, this doesn't change anything.

Which are your next projects?

I just had a concert right now at the end of September in Hanovra together with MDR orchestra. And now, in October I have a recital in Halle together with the pianist with whom I have been playing for years, Andrei Banciu. On October 31st I have a concert in Nurnberg with the Nurnberger Symphoniker orchestra, and in November there are also concerts with the orchestra in Germany, so until the end of the year this is all that is left, because a lot of things have unfortunately been moved to next year because of the situation we are in. But now what is established until the end of the year remains unchanged and that is a very good thing.