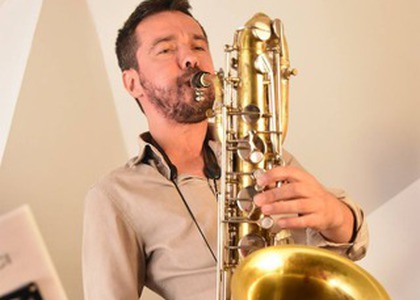 What were your thoughts on opening the second series of "Gustări muzicale"? On the 18th of October the first episode aired already.

It is a very difficult period for the artists and I think that it is not the financial part that is felt the most, sort of to say, because a lot of my musician friends don't have as many concerts or don't have concerts at all compared to previous periods. It is not necessarily this financial part that I think is missing, but more the humane part, the real contact between two musicians who meet to perform and the things that spark when they happenduring live music. The "Gustări muzicale" are a pretext to meet again in a very confined format, of course, given the current conditions, and to spend some time together, on Sundays, talking about life, about music, about food, about things that lead us to another direction than the one that we are subjected to every day, with the news we receive, and the things related to this virus which invades us all and we don't want to allow these things to happen, at least in our mind we're free. I think it is a common good - music is something that should be in everyone's house and it's a form of energy and beauty and something every individual should enjoy if they'd allow art in this form, too, in their house.

What do you propose in the recitals that follow? What is the audience to expect?

A laid-back atmosphere. They aren't necessarily recitals because, of course, the scene cannot be replaced and the feeling you have when you play in front of a real audience who is before your eyes, but, in the near future, I want to invite these youngsters who maybe aren't so well-known, but who are really talented, like I did in the edition which took place recently, on the 18th of October, when I celebrated my birthday, as well, in the process, and it was very beautiful.I had Bogdan Tănase on guitar and Marta Popescu on vocalsas guests. Two young musicians who are 20-20 something years old, thus, they are very young and very talented and I am still going to invite young musicians, graduate musicians. There are a few friends and artists in the theater field whom I would I like invite and who are both actors and musicians, and I want to exchange ideas and music with them. I don't have a defined list of the artists who will come yet. For instance, next week, actor and performer Zoltan Butuc is invited, who is also a writer of his own pieces. He has a part of his music which he writes himself and a part of his music which is made up on lyrics of poets such as Nichita Stănescu, and he is a very interesting individual and I am sure that it is going to be very beautiful and we'll have interesting things to talk about and share through music and by word of mouth.

Tell us, when and where can the audience listen to you?

They are on Sundays, starting 3 PM and they last about an hour, usually. They are announced via Facebook. They are broadcast live on Facebook, so people can access the Gustări muzicale Facebook page. Or they can access my page, Cătălin Milea, around this time and they will see this Sunday meeting, "Gustări muzicale", there.