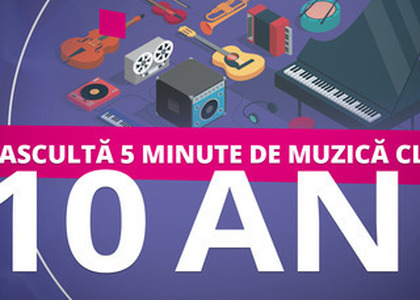 Since 2014, the project 'Listen to Five Minutes of Classical Music' in schools is a national program that is carried out thanks to a partnership signed between Radio România and the Ministry of National Education.

The projectfacilitates the children's approach to classical music in the simplest way, through the concrete audition of the materials provided by Radio România Muzical.

Mihaela Manciu - project coordinator in Brasov and teacher at Vocational High School of Music 'Tudor Ciortea', gave us in the following interview details about the results of the project and the impact it has on children and the teaching system.

From teacher's perspective, how important and useful, do you think the project 'Listen to Five Minutes of Classical music" is for students?

Nowadays, children are very familiar with the media and the Internet. Well, in this context, they are bombarded with messages every day, which are not always the best,unfortunately . Of course, these messages are also in music and thus, music, to some extent, educates children. So why not we try to show students that there is another kind of music? Why leave this to chance? The 'Listen to Five Minutes of Classical Music' project expands the horizon of the students. It teaches them that there is something else in the music industry. They might not be fond of Bach or Mozart, but they may like Beethoven or Bach or they will turn to jazz or film music. The important thing is to know that there are other options too.

The project also had an impact on the quality of music lessons, given that they now take place online.

Of course it had an impact on the quality of the music lessons. After all, during the music class, they are singing and listening. Unfortunately, in the online classes it is not possible to sing anymore. We can't burden the children with theoretical information, so we stick to the listening part.

Have you noticed a higher involvement from the students' part?

Without doubt, there is a higher involvement from the students part.I believe that music education can become much more effective and attractive if the activities in which students are provided with information are designed to arouse curiosity and trigger a sense of knowledge through their own efforts, such as 'What has been written about Mozart apart from what the teacher is telling us? Or 'What did he make apart from 'A Little Night Music'?

Finally, I would like you to tell us, how is this Radio Romania Music Project received in the schools in Brasov?

Before answering the question, I would like to say that the project was brought in Brasov in the spring of 2014. The representatives of Radio Romania Music came to County School Inspectorate, to Mrs.Bucur. She then called professor Șerbănuț Liliana who became aware of this project at that moment. She was delighted, especially because she knew how difficult it is for her colleagues to find suitable materials for the music lessons or history of music courses. Fortunately, the materials were very well selected and structured, as they could also be used by other fellow teachers, especially class masters teachers and not only. The project was very well received by colleagues in the county and grew from year to year being beneficial and present in middle schools and also in high schools. But, unfortunately, after professor Șerbănuțretired, no one took care of it until last year when Mrs. Cristina Comandașu asked me to put the project back on track. There is good and bad news, but I'll start with the bad one.The percentage of school units participating in this project is very low, somewhere at 20% of the total number. This is because some teachers were not aware of this project and those who knew about it were not interested. There are still teachers who think that the music lessonsare unnecessary and they skip it as they do with drawing and sport lessons because they believe that those lessons are not as important as the others ones. The good news, which brings me joy, is that the schools which do participate in this project are completely involved.The feedback is very good, both from the teachers and from the students. For example, I know teachers - and in this way I would like to thank all those invited to the project - who have been in contact including with university professors, invited students to classes and gave recitals, thus making the children happy. I say it's good. A positive aspect. I'm pretty optimistic.