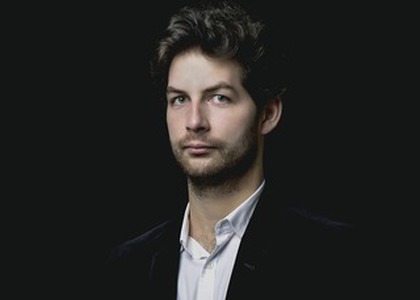 Violonist Valentin Șerban - qualified in this year's semi-final of the "George Enescu" International Contest - and pianist Ioan Dragoș Dimitriu will have an online recital, as part of the "Tuesday Evening Season" organized by the "George Enescu" Philharmonic.

First off I would like us to talk about the programme. I have a noticed a diversity of styles. Is there a theme you started from, or a narrative you wanted to explore?

Part of the repertoire is comprised of the works that Dragoș and I played at the "Enescu" contest. Some works that are very dear to us, Piano Sonata No. 7 by Beethoven and Fantasie by Schumann, which is, probably, my favourite work. As far as I know, we wanted to intercalate these with more pieces by Debussy, to offer a great contrast of emotions and sensations. I hope these can be communicated in this online environment as well. Unfortunately, it won't be a concert as it should, with audience.

Ioan Dragoș Dimitriu is the pianist alongside whom you will perform the recital. Tell us about your relationship with him. When did you start to collaborate?

Dragoș and I have known each other for many years. Maybe more than 10-15 years. We've known each other since we were at the musical high school in Brașov. We weren't in the same year, but we had some common classes and we performed together as well, not a lot, but ever since then. And so, a professional relationship materialized, and not only that, but also a very close friendship. Let's say, in the last half of the year, when, probably, some ideas and common goals brought us together.

I understand that the recital at the Small Hall will first be recorded and then broadcasted online, is that so?

Yes. We will record Tuesday morning.

How are the artists doing during this period, without the contact with the audience?

It's a difficult situation. It is completely out of the ordinary to have long term concerts with no audience. I might say it is abnormal, because there is an exchange, an exchange of energy during a concert. There must be a receiver, and that, in my opinion, loses a lot of sensations in the online environment. There are some sensations, emotions, some moods, that I think can only be transmitted live. Of course, there are the emotions coming from the audience. Now you play for an empty hall, and even if you know that behind the camera, behind the laptop, you are being watched, there is a certain sensation and, as it seems, it's not going anywhere. But we have to get used to this too, unfortunately.