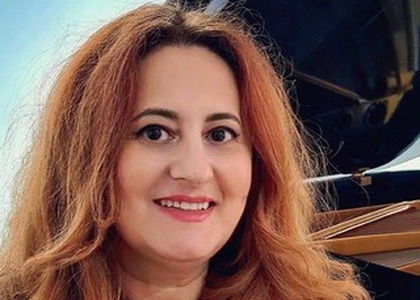 The "Sabin Drăgoi" International Canto Contest moves online this year. It will take place in the interval 26-29 November, but we find out more details from the mezzo-soprano Aura Twarowska, the Artistic Director of the Contest.

You have a special relation with this contest; you won the 1st place at the first edition of the "Sabin Drăgoi" International Canto Contest and you've been the artistic director of this contestsince 2015. First thing first, I'd like you to talk about this transition from laureate to artistic director.

Gladly! As you said, I won the first edition, the Grand Prize, in 1997. I had just graduated my master degree in Mrs. Georgeta Stoleriu's class and I participated at the first edition in Timisoara. I was close to the festival for a time, while I worked at the National Opera from Timisoara, but in 2006 I was offered a long term contract at the Vienna Opera and this connection weakened. But at the initiative of Mrs. Ana Stan, the one who founded the contest and initiated it in 1997, I returned as a member of the jury. Since 2015 she stepped back and left me in charge of the contest. Therefore I'm the director of the contest since 2015. Something interesting that I could tell you is that I set up a new section in 2017, at the 10th edition, which is addressed to students from high school and bellow which turned out to be a really great success. We had so many eager young people signed up for the 2017 edition and the following ones, because for two years we had only this section. This year will take place the 12th edition, where we'll combine the two sections.

In the current context the contest moves online this year. How was this change from an organizational point of view?

We took this decision in April or, in any case, in the spring, when the County Council announced the submission of online projects. We were very determined,me and the NGO that I'm working with at this edition - The Kratima Cultural Association from Timisoara - and we perceived this change as a normality in this unusual year. Therefore we received funding from the County Council.

We came with a special repertory for this edition. The "Sabin Drăgoi" Contest was a really difficult contest, it had three phases, and the repertory started from baroque music to contemporary music through Mozart's music, through oratorio music, through lieds, classic songs, folkloric adaptations and even arias from Dragoi's works. So it was a complex contest. But for this edition we narrowed the repertory to three songs for the 30-35 section - 30, women, 35, men - and two songs for the other category.

I think we transformed a crisis into an opportunity, because this way we can have guests in the jury and really special artists that otherwise we couldn't have afforded live, in Timisoara. Therefore we have jury members from Vienna State Opera, Australia, and Greece- two sopranos from Berlin. For the Youth Section we have professors from four university centers from all around the country etc.The registrations closed on the 22nd of November and, as we estimated, we have even more participants than in the previous editions, when the participants had to travel to Timisoara. And another interesting aspect would be that we have more foreign participants. All those interested will be able to watch us in the Contest Gala, on the 29th of November, 6 p.m., on the contest's Facebook page.

The cash prizes are substantial, but you're also offering a special prize, a participation in a concert on the stage of the Romanian Athenaeum in the next season. Are young interprets still more interested in such prizes?

I'm firmly positive that's the case. I sure was driven by this kind of prizes back in the times when I was competing in canto contests. It's even more important than a sum of money, which come and go very fast. A collaboration in a concert is more important and more incentive for a contestant. This prize is offered by the artistic director of the "George Enescu" Philharmonic, the masterPrunner. We have other prizes offered by musicians as well. For example, our friend, the generous bass Theodore Coresi from Vienne will offer a 7 days masterclass as a prize, held online during these times, of course.And we expect more prizes on behalf of the members of the jury, but those will be set throughout the judging and announced at the 29th of November gala, of course.

As a member of the jury, how do you perceive an exclusively live contest? Is such a judging more difficult?

No, I don't think it's more difficult. I find myself among those artists who doesn't see this period as the end of the world and I think we have to adapt and do something, not complain too much, but do things. I don't see it as much more difficult. Of course that speaking about a live show, the same things are missing from a contest held online as from other live shows - the emotion and the direct interaction between stage and public.