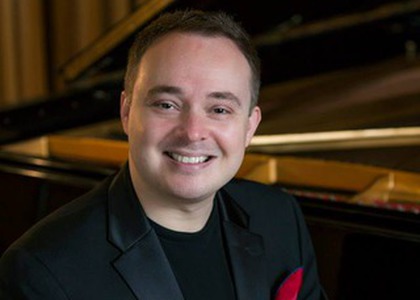 Interview with pianist Matei Varga, director of the Vendome Prize

Romanian pianist Matei Varga has become director of the Vendome Prize, where he has been general manager for more than a decade. About how these milestones were reached and about the future of this prestigious competition we find out from the New York-based Romanian musician.

I understand you started out as a laureate of this competition, whose director you've now become, correct?

That's right. It all began in 2003, when Alexis Gregory, the founder of this competition, which back then was in its second edition, invited me to take part in one edition of the Vendome Prize following the suggestion of Mariana Nicolesco and Radu Varia. First I went to London, where the semifinal was taking place, and then to Lisbon for the final, where I played in front of the jury and was among the finalists. I didn't get the Grand Prize, but at that time the jury included Elisabeth Leonskaja, who awarded me a special prize which was an extraordinary encouragement for me, and it wasn't the only exceptional thing to happen then, because after the final Alexis Gregory came to me and said "I really loved the way you played! You remind me of Dinu Lipatti, so I'm going to call you little Dinu." Obviously the best compliment I could have received from anyone! And he asked me right off: "How can I help you in the future?" To which I replied just as straightforwardly that I'd like to study in New York once I was done with my studies at the University of Music in Bucharest. To which Alexis said "Fine, let's see what we can do!" A year later I was already in New York, starting my masters' degree at the Mannes School of Music, where a new stage in my life began. A few years later, in 2009, Alexis, who lived in New York, contacted me again and asked me if I'd like to come and help organize the competition. So this time I'd be involved in the other role, that of administrator and organizer. And then, in 2008 to be more precise, I became the project manager or general manager of the Vendome Prize. Unfortunately, Alexis Gregory passed away in April this year and the competition was left with no one in charge, and having been general manager for all these years I was obviously very honored, although very sad about Alexis' passing, and at the same time glad that I'd be able to keep this competition alive in his honor and in his memory and, I hope, to run it at least as well as I have so far, if not better.

Seeing as this is a truly international contest, how exactly is it organized?

The contest has a number of peculiarities. First of all, it has been hosted by various musical institutions, and cultural institutions in general, throughout the world. As I said in the beginning, the final took place in Lisbon, or to be more precise with the Gulbenkian Foundation. In 2014 we moved to the Verbier Festival, with which we've had an exceptional collaboration these last few years. Now we've decided to bring it to New York. The competition is by invitation only, meaning that unlike most or even all other piano competitions I know of, the candidates cannot apply by themselves. So we have an artistic committee that makes recommendations. All of them are great and important musicians or piano teachers from all over the world. They make the recommendations, after which I personally invite each of those recommended, and only then can they submit an application. At the moment we use this process to receive applications and of course perhaps the most important element of these applications is a video recording which the jury will examine and which they will use to decide the twelve semifinalists. These twelve semifinalists will be invited to play for us live in the semifinal, after which three finalists will be chosen. These three finalists are essentially the three prizes awarded, although starting this year we will return to the initial idea of the Vendome Prize as it began in the 2000s, namely that of having a single Vendome Grand Prize and special prizes for the remaining semifinalists, who did not receive grand prize.