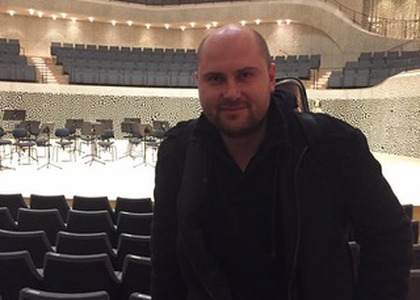 About the event we find details from Ladislau Cristian Andriş, artistic director of the Orchestra, in an interview conducted by Florica Jalbă:

How did the idea to make this film come about?

This idea is, in fact, a sequel to the first documentary. For the Romanian Chamber Orchestra project, it is very important to reunite the musicians in this pandemic context. We have musicians working in all the orchestras in Europe and we also have musicians from the country, and in this situation it was very difficult to meet again, because the list of countries from which the musicians could come and quarantine changes from week to week. . We had to do a plan A, a plan B, and a plan C… what happens if a certain musician can't come from a certain country ?! The documentary film "Together for music" illustrates the meeting of the musicians from the Romanian Chamber Orchestra and the conductor Cristian Măcelaru for the project from August 2020. Cum e structurat documentarul?

Catch our whole project. That is, we have a part of masterclasses for violin, viola and cello where we had Alexandru Tomescu, Irina Simon-Renes, Alina Lepper Petrescu as teachers, we had Alexandru-Mihai Bota for viola and I also taught, and on the cello I had Olga Mănescu and Octavian Lup. We had the only conducting masterclass held by master Cristian Măcelaru in Europe this year, which was attended by seven young conductors from Romania and Europe; I also had a conductor from China who lives in Europe. And also, our project ended with four concerts. The first concert was in the summer garden of the Capitol Hall in Timișoara, the second was in front of the Romanian Athenaeum, the third concert was broadcast live from the Radio Hall and was included in the project "Heirs of Musical Romania" and was watched by 12,000 of live people (so far it has been watched by almost 30,000 people); the last concert took place in front of the Urban Culture Center in Cluj-Napoca. All these events, along with masterclasses and what the musicians experienced, the joy of the meeting can be seen in the structure of the documentary.

Do you intend to make a documentary film for each project you will carry out in the future?

Yes, it is our intention, because it is very important for our audience to know each of us very well. We have a relationship with the public as if we were one family, we want to become unitary and thinking, to show what was in our head, what is happening in us during this period, what it was like to do this project and how it is done in fact each of our projects.

When will the next project or concert take place?

We have two projects in preparation. One will take place in August because until then, we hope that the world will get closer to the normality we knew before 2020. And the second project will take place between the 26th of November and the 6th of December; will be the first international tour of the Romanian Chamber Orchestra, which will be performed by Konzertdirektion Schmid, which is one of the top business agencies in the world. We are preparing him to represent Romania outside the country. To make a comparison, how in sports we have national football teams, handball, to have a national team of musicians in music. Obviously, there are so many very good Romanian musicians that we can make ten symphony orchestras, but we try, from project to project, to remain the same or those who will come to add value and represent Romania. Let's say - look, this Romanian is a concertmaster at the Frankfurt Radio Orchestra, this Romanian is a concertmaster at the Concertgebouw Amsterdam, this Romanian is a concertmaster at Munich…

How do you look at the period we are in now, the one in which the vaccination campaign is taking place?

I want to mention that I live in Switzerland and I also watch the Romanian press daily and what happens in Romania and I can make a comparison between the two countries. Somehow, I felt, to my surprise, that all the time Romania was one step ahead of Switzerland, including information, about the moment when the vaccination started, about the number of people being vaccinated. Given that I'm not a doctor, I can't say to get vaccinated or not to get vaccinated, it's a personal decision. But if doctors agree to be vaccinated, I think we can trust their decisions, their science.