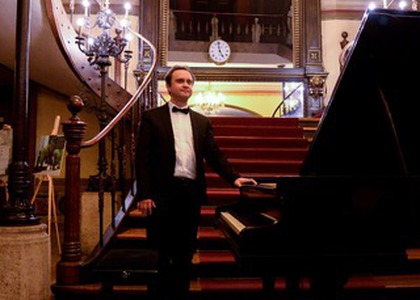 Pianist Ştefan Lovin gave, in December, at the Philharmonic in Sibiu and Brașov, two recitals with a program signed by the musician as a composer. Titled "Romanian carols in the resonance of the piano", the compositional project made by Ştefan Lovin consisted of the adaptation, reinterpretation and development of the main themes of 12 carols.

More details about the projects we find out from Ştefan Lovin, in an interview made by Florica Jalbă:

How did the idea to make this project, Romanian carols in the resonance of the piano, come about?

This idea appeared several years ago, it is not a spontaneous idea. I also studied Music Pedagogy 20 years ago with maestro Valentin Gruescu. At that time, the emphasis was very much on choral singing and, in this way, I had the opportunity to know many creations from Romanian choral literature. I was also a member of the St. Apostle Andrei Orthodox Choir under the supervision of maestro Valentin Gruescu and I approached a very wide Romanian repertoire. From there I came up with the idea to translate this choral richness into the sounds of the piano. It took years of musical thinking in order to give it a shape as appropriate as possible to the sensitivity of the modern listener… because, practically, it is not a literal transposition of the choral score on the piano, it is a recontextualization, a readaptation, a reorchestration and, implicitly, , by the definition of the title, an enrichment of the choral lines.

What were the selection criteria for the included carols, so that you chose 12 songs from an extremely wide repertoire?

I listened to many more carols ... the ones I liked the most in the first place and, secondly, the ones that could be adapted to the timbre of the piano. Of course, it was a re-transposition of the miniatures in a different tone than the basic tone. For example, Dumitru Georgescu Kiriac's carol Nouă, azi, ne-a răsărit should be written in G major, and I translated it in A major; I looked for the best expression of the carol on the piano. Not all choral tones fit the piano too.

The winter holidays are over. What other projects do you have in mind?

I will present Johann Sebastian Bach's Well-Tempered Clavier in several locations. I have already performed it at the Mogoșoaia Palace in December, the Book I. I am also going to prepare The Book II and the philharmonics will probably be interested in this thought of mine to play the Well-Tempered Clavier, which is not played in Romania quite frequently, unfortunately. Then I prepare Robert Schumann's Symphonic Etudes, an orchestral work for piano, which, again, is not a work much played by pianists, unfortunately. I think I will have the opportunity to express myself at the Jazz Festival in Sibiu and Gărâna, where I will come again with an approach to traditional Romanian songs, but enriched by modern jazz, fusion jazz, which allows a comprehensive approach of these traditional Romanian masterpieces.