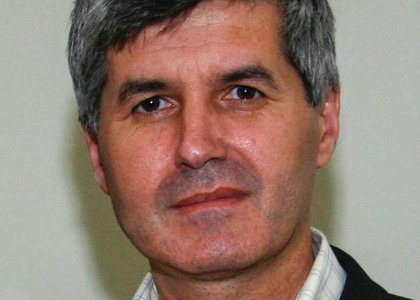 Interview with Jean Dumitrascu - the manager of the Pitesti Philharmonic

The pandemic imposed the institutions to adapt constantly, according to its evolution.In the first part of the current season, the concerts took place only sporadically with the audience in the hall; most often, they were carried out without the public, being broadcast online, and for some time only broadcasts from their own archives were possible.The beginning of this year gradually brought the possibility for artistic institutions to sell 30% or even 50% of the total tickets.

We find out from Jean Dumitrascu, the manager of the institution, about the activity of the Pitesti Philharmonicduring the pandemic period, in an interview by Florica Jalbă

Looking back, how was the first part of the current season for the Pitesti Philharmonic?

Fortunately, we were at the beginning of the season, compared to last year, when on March 11th, writing an official letter to DSP Argeș, we received an order to suspend the activity until further notice. After that, in June, we resumed our activity, outdoors, at the Summer Theater in Pitești, in the city center and we were able to hold concerts there, fortunately. After the summer holiday which is between the seasons, we, the Pitesti Philharmonic, on September 10, were the first to open the new season, according to the new rules of the time, established by joint order of the Minister of Culture and the Minister of Health, at 50% capacity the hall and with half an orchestra, being forced in this way to change the repertoires, the conductors and the soloists.For a while, we organized symphonic, chamber concerts, after that, when the incidence rate per thousand inhabitants in Pitești, Argeș, forced us to function at 30% of the capacity, another decisions was made. So, we ended up not singing at all, the activity was suspended again, in November.We wrote a series of official letters to the authorities and in the end, the third time we got lucky and they let us organize the Christmas concert, online, without the public.Then in January we resumed our activity at 30% of the hall's capacity - the incidence rate being below to 3 per thousand inhabitants - and now it has been decided to function at 50% of the capacity (the incidence rate in Pitesti and Arges has decreased). It was a tough time. We lost the audience, even though we functioned at 50% or 30% of the capacity. People are afraid to come to concerts because they have to wear a mask. Everyone has to wear it, less the blowers, they are protected by the protection pannels that we installed for each and everyone of them. To avoid other problems, we also cleared out the first two rows in front of the stage. Some spectators didn't come anymore, simply because of the fear of COVID, and that makes me question what will do in the future. I speak as a manager, who has to make an activity report: there are performance indicators, there has to be a certain number of tickets sold and there has to be a certain revenue realized. We spent a lot of money doing the disinfection.

Now that we are in the midst of a vaccination campaign, what is your opinion on this? Do you consider that this is the chance for the musical life to return to normal?

Speaking also about the fear of the spectators.

Who knows when it's our turn. Unfortunately, the vaccination process is not going well. I had problems last year, at the Pitesti Philharmonic. The orchestra was technically unemployed for almost two months, the union demanded my resignation, as I was, as a manager, responsable for this measure taken, a measure which was imposed by the City Hall of Pitesti under whose authority we operate.

What are the plans for the second season? What will you manage to do until the summer?

For the time being, this will be done, on the current legislation, by 50%, probably by summer. It is all about not getting worse, breaking off and suspending the activity. I hope things get better.Maybe, through vaccination, the incidence rate among the population will decrease, because we are making efforts to organize concerts. Unfortunately, not with Tchaikovsky, because you can no longer play Tchaikovsky, you can no longer play Shostakovich, you can no longer play with a large orchestra, it is very difficult, the programs are shorter, they are played without a break. You do know, during breaks, the public used to socialize.