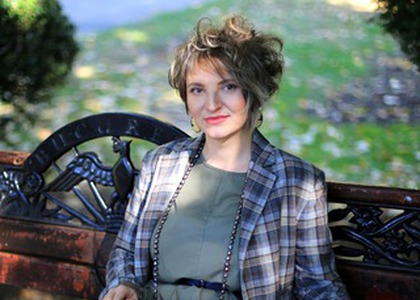 Interview with Ana-Maria Onisei about translating the book "Year of Wonder: Classical Music for Every Day."

"Year of Wonder: Classical Music for Every Day" by Clemency Burton-Hill, a star musician of the BBC Radio 3, is the latest editorial release, meant to popularize classical music. Journalist Ana-Maria Onisei has translated it into Romanian, thus providing us with a unique volume for the Romanian book market. The book was released at Vellant Publishing House, with journalist DoinaTronaru as its editor.

We'll find out the details from Ana-Maria Onisei, in the interview by Florica Jalbă:

We're talking about "Year of Wonder: Classical Music for Every Day", by Clemency Burton-Hill - a book you have translated, which is now available in the Romanian market. To whom do you think it is addressed?

It's a premiere for the Romanian book market. "Year of Wonder: Classical Music for Every Day" is, I dare say, the first book of classical music popularization in Romanian, for it's a book addressed to all the social categories, and that's most interesting. It's amazingly written from this point of view. Even the enthusiasts of classical music will discover many interesting facts about composers and their works, which they probably didn't know. There were many discoveries in this reading, both for me - a classical music lover, and the book's editor. At the same time, it's a book addressed to the public, which, let's say, is tempted to listen to classical music, but doesn't know exactly from where to start. It's the writer Clemency Burton-Hill herself who writes in the foreword of the book that she addresses (with a good dose of British humor) those who think that classical music is a sort of a private party to which they haven't been invited. I also believe that she addresses a very young audience, because her texts are written in an alert style, full of wit and anecdotes, with emotion, and they're not even that long.A work of classical music with its story corresponds to each day of the year, and the text itself is one-page long and easy to get through.

Let's say that the book is structured as a whole year calendar with 365 days, and for each day there is a musical suggestion.

Exactly. That's the book's structure. Basically, it starts on January the 1st and goes on towards the end of the year, and each day of it, each season, there is a classical music composition bound with its story. Most of the time, the chosen dates connect to a historical event from classical music, from the classical music history. They have a connection with an emotion or a different thing which can be relevant to that day. This is very beautiful because we can leave the book somewhere in our library, and one day, when we feel inspired, open it on that same date, see what musical composition corresponds to it, and why not, read its story and listen to it. There is a Spotify playlist for the English and Spanish editions. If the reader types the name of the book in the search bar, he finds there a playlist with all the compositions presented in the book for each of the days. We can also recognize one of the works we have read about while listening to Radio Romania Music, and be jolly to listen to it, knowing its story in detail.

For the final of our interview, please tell me, did you have a chance to talk to the author of the book while you were working on the translation?

No. There was an interview planned, but it happened that we had run pretty late with the translation and publication. Meanwhile, Clemency Burton-Hill, a genuine star of classical music, and a violinist, a radio host for BBC Radio 3, a presenter of main classical music events such as BBC Proms, has suffered an unexpected cerebral haemorrhage. She was in New York when it happened, where she was the creative director for the local public classical music radio station. She's been operated on, got out alive (at only 39 years old), but she's still in a recovery process. She had been in a coma for 17 days, after which she gradually recovered. In one of her interviews for the British Press, she told that one of the things that motivated her was listening to classical music while recovering. So no, I haven't talked to her yet directly, but we're trying to reach her and see whether she is willing to give us an interview. However, the book in itself, her writing style is so warm, so open and humane, that I sensed her somewhere very close to me as I was translating because the feeling I had, and which I hope the readers will have too while reading this book, is that she speaks directly. It's the same as if we sat down to share a cup of coffee or a glass of champagne and relaxed while listening to classical music. Clemency Burton-Hill is a musician at the core, a violinist. She has collaborated a lot with Daniel Barenboim and tells us a bit about this musical universe in an amicable way. That's what the book's like, a collection of little pearls, short stories from the inner universe of composers, but also about their compositions.

The book can be found in all the book stores, online, and on the Vellant Publishing House's website.