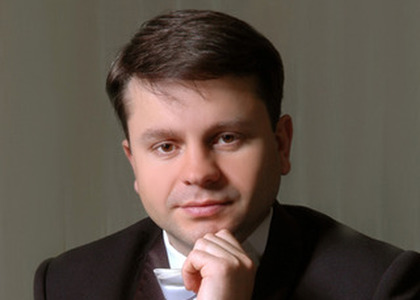 The "Serghei Lunchevici" National Philharmonic in Chisinau suffered numerous losses as a result of the fire that took place last autumn. In the meantime, campaigns have been launched to support the institution and many Romanian philharmonics have contributed through donations. About how the Philharmonic carried out its activity during this period and about the current state of the building, I found out from Mihail Agafiţa - conductor and artistic director of the institution.

Almost five months have passed since the building of the Serghei Lunchevici National Philharmonic in Chisinau was burned by fire. Mr. Mihail Agafița, how did these months go and how did the Philharmonic work?

Right after that fire, a very important concert followed, which I held at the National Palace, which is called the "Gala of Musical Excellence", which I held on International Music Day, the 1st of October. This was followed by a series of concerts at the Palace of the Republic. This hall, in fact, was offered to us temporarily, until another hall was built. I also made the opening of the season there, with a Beethoven program - 250 years. There were also some open-air concerts and also online, and on November 20, I received this ban, to stop holding concerts, and December was practically a month-long break, in fact, a month of study for everyone, and in January we did a few more concerts online and recently we received some great news, a new regulation, in fact, that allows us to hold concerts with the public, but not more than 250 people present in the hall and we are preparing these days a very important event with Latin symphonic music.

What is the current condition of the damaged building and how long do you estimate that it will be possible to resume the activity inside it?

I find it very difficult to answer this question, because the condition of the building can only be assessed by specialists, but for this a team must be invited. Again, for this, a competition must be held, which unfortunately was not done. We are also waiting. Variants, of course, that there would be two, one would be to demolish those walls that remained untouched by the flames and to build, given these walls or the second variant, would be to demolish absolutely everything and build the building again. I have absolutely no idea how long this could take. Of course we would like it to happen as soon as possible. At least at the Palace of the Republic, where we were temporarily accommodated, we can only stay there for two years. Next, we'll see what the situation is. Now, to be honest, I don't really think that in such a short time a new building will be built, because you realize that this requires certain construction techniques, so it is a different type of building than a simple block or a building. simple hotel.

Fundraising and donations for the institution continue and I invite you to tell us how they have gone so far and what are the needs still unmet?

I want to say that the fundraising, yes, is still ongoing and we are very grateful to all those who jumped to our aid, because a lot of people mobilized, which we can not say about the state authorities, for now, unfortunately. So, as I said, many people mobilized from here in Moldova, but also from abroad, we also received aid from Japan, European countries and the United States. We were also very helped by the Romanian Philharmonic, so we thank you from the bottom of our hearts for all this help. Of course our needs are very high at the moment, first of all, our library has burned down. I consider this to have been one of the greatest fortunes we have ever had and unfortunately we have lost, because these scores have been together for 90 years and now we practically have to we start again. We have two accounts, one is the official philharmonic account, and the other is an account opened by the government. As far as I know, about 80,000 euros were raised in both accounts, but this is so, with great approximation. What happens to the money that is stored in the government account, I can't know, will probably be transferred to the company that will take care of the construction. What was gathered at the philharmonic was decided to be used to cover our current expenses. For example, our chairs burned, our desks burned, as I said, we also have problems with the library, which needs to be renewed, so this money is spent on this. For example, they burned four concert pianos. Of course we need more. Temporarily, I bought a high-performance electric piano. We are now an orchestra, so to speak, ambulatory, put in the situation to do concerts in other cities in the country, we need such an instrument, so we bought this electric piano and so on. The needs are very great. In fact, they were great even before this fire, because the orchestra's instruments are very old, I mean here the wind instruments, the percussion instruments, and, of course, we need now more than ever, as we had we need to renew all our gaskets before the fire.

What are the upcoming events, scheduled in the concert agenda of the Philharmonic and where will they take place?

I said earlier that we are preparing a very attractive program for the public, Latin symphonic music, with many soloists, with voices that are only well suited for this music, but we also have instrumental soloists, a clarinet and a solo accordion, a violin solo, a solo trumpet, which improvises in these styles, but also jazz very well, so we are preparing this program long awaited by the public, where there will be dancers, who will create ballet moments, namely in Latin style and which will have place of the Palace of the Republic. So, most of the concerts there will take place in the next two years, because that's where we rehearse, but of course we'll go around the country. We usually do outdoor concerts, but now we're going to do even more, I guess. We have a very picturesque location, it is called Eco Resort Butuceni. It is located 60 kilometers from the city of Chisinau and is very picturesque. It is under a quasi mountain. The village is a natural reservation, where absolutely everything is kept as it was 100 years ago, very rustic, where people come with great pleasure and where we hold many concerts, scenes are built for us. These will be our activities in the near future. The Martisor Festival is also approaching, which is one of the most important, perhaps even the most important festival, which takes place in the Republic of Moldova, especially since, this time, we have a very beautiful anniversary, 55 years of to this festival and we are preparing beautiful programs that we will present here in Chisinau, at the Palace of the Republic, but also in the cities of the country. We, anyway, try to keep our activities, regardless of the problems that have befallen us and continue to make art, even if it is very difficult.