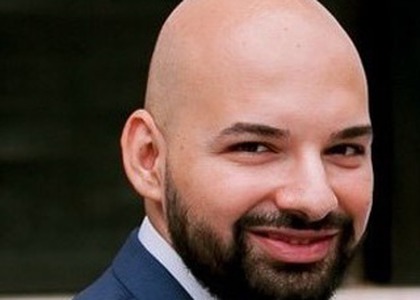 Interview with baritone Cristian Ruja and bassist Ştefan Lamatic, the protagonists of the recital on Tuesday, February 23rd at the Romanian Athenaeum

The season on Tuesday evening at the Romanian Athenaeum will bring in front of the public tomorrow, from 7 PM, the young baritone Cristian Ruja, winner of the 11thedition of the International Contest "The Road to Celebrity". Following a partnership concluded by the "George Enescu" Philharmonic, it offers the winners of the contest the opportunity of a recital. Cristian Ruja, accompanied on piano by Raluca Ouatu, will have as a guest the bassist Ștefan Lamatic, another name of the new generation of vocal soloists.

Details about the recital can be found in Cristian Ruja and Ștefan Lamatic.

Cristian Ruja, the prize obtained at the International Competition "The Road to Celebrity" brought the opportunity of this recital. What will we be able to hear on Tuesday night and what were the selection criteria for the program?

For this recital we have prepared for the public some of the most famous areas for baritones; my guest, Ștefan Lamatic, having notable areas from the repertoire of young bass. It will be a musical journey from Mozart, Rossini, Donizetti to Verdi, Bellini, Massenet and up to Gershwin. I really wanted to invite bassist Ștefan Lamatic. We are connected by an old friendship, from college, but also a great artistic admiration that I have for him.

How is the collaboration with pianist Raluca Ouatu, who will accompany you both?

Raluca Ouatu has been my co-teacher since the first year of college; I was a student in the class of soprano Bianca Manoleanu. We participated in several competitions together. This time, at the "Road to Celebrity" Contest, with her co-host, I managed to win the "FloricaCristoforeanu" Award.

And what are the plans for the future?

It's pretty hard to say. I am open to all collaborations and I hope that in the future we will have access to opera studios such as those in Germany, France, Spain, and in Romania, why not, to be able to participate in auditions to succeed in collaborating with works in the country.

Ștefan Lamatic, how did you receive the invitation to participate in the baritone recital of Cristian Ruja?

We made a beautiful friendship from the first years with the Conservatory, a friendship that continued even after finishing our studies, and since then they haven't even counted the concerts, the shows in which we were involved together.

What were the selection criteria for the program that you will present to the public on Tuesday night?

The selection criteria of the repertoire was to be varied. That's why I chose La calunnia from the opera The Barber of Seville, Viravviso from the opera Sonnambula by Bellini and I got plenty a 'nuttin' from the opera Porgy and Bess by George Gershwin.

What follows next to this recital? What do you have on your agenda for the near future?

I am currently a soloist of the Children's Comic Opera, and in the near and distant future we still do not know what will happen due to the current situation.