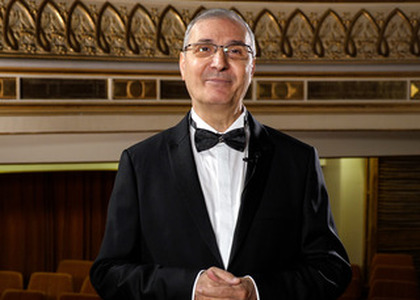 From this day forth, The National Art Center "Romanian Youth" initiates a new project - the Chamber Season. For a start, a series of recordings will be made, and from April, every Thursday evening, Radio Romania Music will broadcast, either live or recorded, the concerts scheduled by the organizer.

We are going to find details about this new project from Marin Cazacu, Director of the National Art Center "Romanian Youth".

The chamber season is the new project that you will initiate within the "Romanian Youth" National Art Center. What were the arguments for conceiving this season, still in full pandemic?

The first and most important thing for the existence of this center is the fact that, from December 2020, we have a concert piano. Finally, the existence of this tool allows us to be able to organize a chamber season as it should be done by an institution that promotes and involves young people. So, this chamber season will take place once a week, in the concert hall of the "Romanian Youth" National Art Center, with the existence of this Steinway piano of a special quality. And, it seems that owing to this season, we can say that from this moment, the "Romanian Youth" Palace, the place where the activity of this Center takes place, will become a point of attraction for lovers of classical music, especially for those who love chamber music.

You said once a week. Will Thursday night become a constant for the chamber season?

Not necessarily that day, because we have other activities in the hall and in other spaces, which can disrupt the development of cultural events. Some will take place on Monday, others - Thursday, at least during this period ... and, behold, the first event - Monday, March 22nd - will actually take place in the form of a recording, because there are no public events at this time. .. We are very happy that Radio România will record this event in which the protagonists will be the members of the Arcadia Quartet, one of the most appreciated string quartets in Romania and not only, internationally. The program they propose will certainly be highly appreciated by lovers of classical music, at the time it will be broadcast, both on the frequencies of Radio România Muzical and, perhaps, Cultural, but also in the form of video recordings that the Center National Art will produce them on these occasions.

There will be seven concerts in total in March and April and three of these events - I'm talking about April 1st, 8th and 15th - will be chamber concerts that will be broadcast live from the "Romanian Youth" Palace by Radio Romania Muzical . There are events in which the semifinalists of the "George Enescu" International Competition are involved - I am talking about the Romanian semifinalists. On the 1st of April, the official inauguration of the concert piano will take place in the presence of pianist Adela Liculescu, currently living in Vienna and studying there, and who, being a semifinalist of the Enescu Contest, has the pleasure of inaugurating this concert piano. The next concert will be performed by violinist Valentin Șerban and pianist Dragoș Dimitriu, and the last of this series broadcast live by România Muzical radio, on April 15th, will be given by cellist Ștefan Cazacu and pianists Andrei Licareţ and Gabriel Gîţan.

The programs of the three events that will be broadcast live and will consist of the works that these young people will present in the semifinals of the "George Enescu" International Competition in May. In a way, we can say that it is a preview of the contest.

The other events ... On the 22nd of March, the Arcadia Quartet will be registered with an extraordinary program, Shostakovich - Quartet No. 8 and the famous quartet " Death and The Maiden" by Franz Schubert. On the 29th of March, we will record with a unique wind quintet, made up of musicians from Romania and Denmark. I remember only two of the most famous performers: the flutist Ștefan Diaconu and the oboist Felicia Greciuc, who together with their colleagues from Denmark will present an absolutely special program, with folk music from the Danish and Romanian repertoire. After that, we have the last two events at the end of April. On the 22nd, the concertmaster of the Romanian Youth Orchestra for a very long period, Radu Dunca, together with the pianist Mihai Diaconescu will present in a duet program works very well known by Grieg and Beethoven. And finally, we will record an event on the 29th of April, which we titled "Enescu forever". Let's not forget that this year we pay tribute to 140 years since the birth of George Enescu. And during this event will be recorded by the youngest musicians works that George Enescu composed in his youth; and these young people are exactly the same age as George Enescu was when he composed these works.