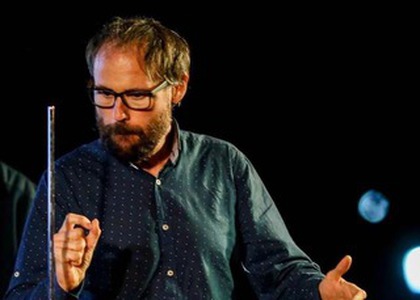 Interview with composer Gabriel Almasi about the MUSICOOLT Project

Today, on the 8th of April, the MUSICOOLT series begins, consisting of seven online workshops dedicated to contemporary music. Today we are going to find out more details about the project initiated by the composers Gabriel Malancioiu and Gabriel Almasi, from the latter, in an interview by Petre Fugaciu.

What does this project entail and what goal are you aiming for?

I came up with this idea through the experience and interactions I've had with the students from other faculties, at the cultural music courses, the so-called transversal competencies, initiated by the West University of Timisoara. I noticed here that students who come from other faculties, let's say non-musicians, they are very interested in new music and then I along with my colleague Gabriel Malancioiu, had the idea to make some sort of concert-lessons and debates about new music and to somehow hold these outside of the university as well. Then we thought to start off locally in unconventional spaces to have small musical meetups, however of course, the pandemic happened and since then things have complicated a little. But, thanks to the advantages of technology we have the possibility to meet online and we talked with our colleagues from other universities, from other faculties, our composer colleagues from Bucharest, Cluj, Iasi and Timisoara. Somehow,we made a project that contains some workshops through which we are trying to debate what new music, classical music andcontemporary music means.

Contemporary music is very young. Actually starting from the 20th century actually, music has always been redefined. The 20th century led to a big change, a large rupture, several new trends have spawned, new experiments, technology evolved at a very fast pace and all of these countless musical directions have evolved just as fast. They have somehow allowedthe commercial aspect of music to prosper and contemporary music, modern classical music let's say, fell behind a little. It's actually hard to say how it is perceived. Usually, people that are very investedabout a certain branch of music are somewhat against the idea of contemporary music. However, I believe that the curious individual or curiosity itself leans towards modern music because it is not possible for modern music to not be a part of society. It is a part of our society, more so, it is just about a mirror of the society we live in. Modern music somehow contains all sounds, the resonance of all that is around us. All possible and impossible sounds of nature can turn into music through contemporary music. So this idea of contemporary music, because it does not contain melodies because it doesn't have - I don't know, that melodious aspect or it does contain melodies, but in a different manner or because it contains new sounds, it could scare off some people that are let's say, very invested about a certain branch of music.

Do you believe that a lack of contact with classical music or with the aspect of academical music, whatever we call it, could help people warm up to modern contemporary music, the new music?

I think so. I, myself come from a non-academic background. I haven't graduated from a musical highschool so to say. I grew up and somehow started music, maybe with Bartok and still, my background is in rock. I noticed thatfor me this personal approach was much easier than it is for a student that is invested in a certain aspect and besides, as I was saying I noticed this tendency towards new music for students who aren't musicians. Perhaps this idea of not rejecting something new is more common among people who are not very investedin classical music, so to say. Our goal, in actuality, is to make people curious. We are also expecting people who maybe have never been to a Philharmonic concert in their lives. So maybe even people who know nothing about symphonic orchestra may come. What we are expecting out of our audience is that they arrive with an ounce of curiosity, we wish for curious people to come. In my opinion, curiosity is in fact the key that opens many doors including the door that leads to the mysteris of contemporary music.