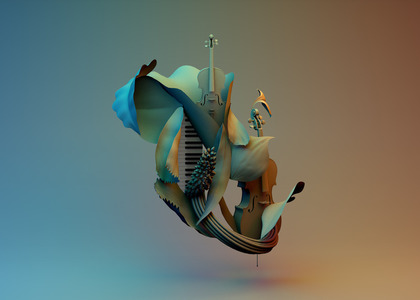 With a less common course, the 'George Enescu' International Competition took its first stages last year, with the promise of bringing 'Beauty in Life', despite the pandemic. These took place online, a measure taken of course so that this prestigious competition, which has already become a national symbol, could exist.

Saturday, May 15th, 2021, in addition to the effervescence of the competition, brought us a premiere in the history of the Enescu Contest, in the cello section, an age record. We listened to the youngest winner in the history of the Contest, 14-year-old Jaemin Han from South Korea. He performed Concerto No. 1 in E flat major op.107 for cello and orchestra by Dmitri Shostakovich and won the First Prize, worth 15,000 euros and various other opportunities for international promotion.The winner of the second place, Sebastian Fritsch, aged 25, performed in the Final, the Concerto in E minor for cello and orchestra op. 85 by Edward Elgar and on the podium we also had a Romanian - ȘtefanCazacu (27 years old), who obtained the third place. He amazed the audience with the perfection of the interpretation and the beauty of the phrases, giving us the Concerto in and minor for cello and orchestra op. 104 by Antonin Dvořák.

Statements after the final on May 15th, 2021, at the Romanian Athenaeum, held with the participation of the "George Enescu" Philharmonic Orchestra conducted by Nicolas Altstaedt.

"It was a test. I think we passed the first hop; we have two more - the violin and piano finals. We are very happy that the audience started coming to the hall. We were less in the hall at first, but it was It seems that I opened their appetite with this competition and, first of all, with the quality of those who evolved in the competition. It was also a very interesting program. It was difficult, but these things are not visible and it is good not to. It is important what was heard, what was seen on TV, what is to be heard on the radio, it was a test for us and I think it was an experiment that will help us in September, when we will have the Enescu Festival. We hope that then there will be more public in the hall, it is no longer up to us, it actually depends on the public.It depends, practically, on the entire population of Romania - if we will be vaccinated, if we will be good, if we will not mess up after these days. It's true, this is the situation, but we hope that things will go well and we will do everything possible for the Romanian public to see the best concerts, to see the best bands, to see them in very good conditions. And, with the help of radio and television, I can tell you for sure that what we have prepared is of a special quality, considering that it is the 25th edition of the festival, the George Enescu Year. "

David Geringas, chairman of the jury:

"Culture is an important component of humanity. Humanity cannot exist, it cannot survive without culture. I am glad that this difficult period is over and I hope that the public will also enjoy concerts, shows or exhibitions, more than before."

"I was very pleasantly impressed by the high level of the three cellists. They all have a perfect technique, they master the instrument very well. But, of course, ultimately the musical personality matters a lot. I was very happy that there were three concerts that There are concerts of great substance in the cello repertoire.I was very happy to see that there is such an event, especially after this period when there was no music and to see that it is public in the hall. The orchestra sang, you see, with great pleasure. So, a very successful event. "

"I would start with the level of the Enescu Competition. I think it has already reached the highest level of international competitions. The winner three years ago, Zlatomir Fung, who after the Enescu Competition went and won the Tchaikovsky Competition, is just a confirmation of this fact. This time I had the privilege of listening to all the stages of this competition, from the preliminary phase, on CDs, I was in that preliminary commission, and then I participated online in the first stages and, of course, I was live and in semifinal and final.It seems to me that the level is absolutely extraordinary. There is no difference at the moment between a Tchaikovsky competition, ARD or all the cello competitions that are currently the most popular. So considering that we have a Romanian competitor in the final, it is extraordinary for Romania's education. I think the other two competitors, Sebastian Fritsch and Jaemin Han, are extraordinary talents with some fantastic schools behind them. The fact that ȘtefanCazacu is there, among the first three competitors, I think does us great honor, to Romania.

I think that the stars were aligned and today we were able to be - with a mask, it's true, with some minimal restrictions, common sense - in the hall of the Romanian Athenaeum and to be able to be present at this absolutely extraordinary event.

I would like to congratulate the organizers for having the courage to continue the competition. There were dozens of very important contests that were canceled out of fear, out of convenience, lack of sponsors, for various reasons. The Enescu contest went ahead and I think it is an extraordinary success for Romania in general. "

"It was an important experience for me to be on this stage with the" George Enescu "Philharmonic Orchestra. It is an honor to be the winner of this competition."

"(n.r. It was a final) with a lot of emotions, with a pressure considering that there was a jury in the hall, but the feeling was pleasant ... especially since there was a public in the hall. I felt good."

How was the whole competition for you, from the first stage until now, in the final?

"The whole period was stressful, but full of lessons, full of the joy of learning new scores - Sonata II by George Enescu - but beneficial. If it wasn't for this purpose in my life, I don't know if I would have prepared so intense. So as a human being, I think I've evolved and I hope to continue to evolve. "