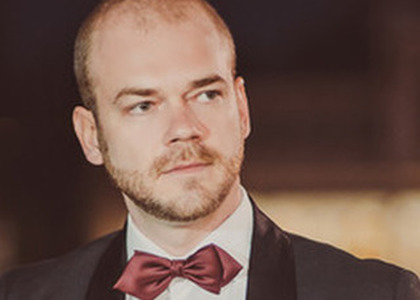 Interview with the violist Traian Boală, member of the Arcadia quartet

The well-known Arcadia quartet will be able to be heard in the recital on the stage of the Romanian Youth Path today, May 25th, starting with 6 pm. The members of the ensemble, violinists AnaTörök and Răsvan Dumitru, violist Traian Boală and cellist Zsolt Török will perform three quartets from the creation of the composer Mieczysław Weinberg.

Today, May 25th, at the Romanian Youth Palace, the Arcadia quartet willgive a recital dedicated to the composer Mieczysław Weinberg. Will it be the band's first audience after the pandemic and under what conditions will it take place?

You will perform three quartets out of the 17 by the Polish composer, no. 1, 11 and 7. We know that Arcadia has the complete repertoire of Weinberg's quartets. By what criteria did you select the three for today's recital?

We have a project to record with the Chandos record label from London, the complete quartet, as you said, the first CD was already made two years ago, released last year. It was very successful, it contained the quartets no. 2, 5 and 8, then we were going to choose three more quartets for the next record in the series and the criteria we use in their choice are also organizational, in terms of the time they occupy on the CD, because some are longer, some are shorter, we have to consider the total number of CDs of the final collection and the classification of the quartets on this number of CDs, but at the same time, of course, listening to them I said that these three quartets to be part of CD no. 2. Given that they have small interconnections for certain reasons or certain references from one quartet toa nother, I found it interesting to put them together.

When will the next recording session take place?

It should have happened already, but it was postponed. We have already postponed this session twice due to the pandemic. Now the deadline would be the end of July. Let's hope this is the final one.

We know that between June 27th and July 3rd, the Arcadia quartet will hold a chamber music workshop at the Gheorghe Dima Academy in Cluj-Napoca. Where did this idea come from and who will be able to participate?

The idea has been around for quite some time, but we have been very busy; but we have wanted for a long time to carry out such workshops, to be able to share further the knowledge we have gathered over time with students and other instrumentalists in Romania. Now it coincided with the fact that we have a manager in Romania who takes care of us and who helps us a lot in the realization of the project and may be that also contributed a lot to happen now. We also wanted, with all our heart, this year to make the first edition, and then when things will be more normal, to hope, starting with the next year to already have an active edition, to be able to make some videos, presentation clips and we can develop the project properly in the next editions.