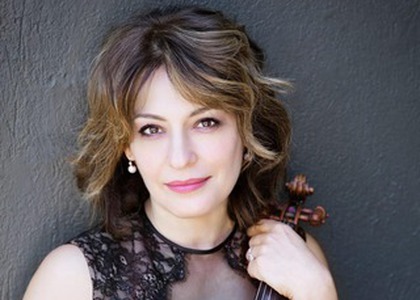 Interview with violinist Irina Muresanu about the release of the CD Hybrids, Hints & Hooks

Irina Muresanu, together with pianist Valentina Sandu-Dediu, you recorded in 2014 the music for the CD Hybrids, Hints&Hooks, which contains music by composer Dan Dediu. What is the context of the release?

This record release is by the Metier label, which is an offshoot of Divine Art Records. This branch is where contemporary music CDs are released.Dan Dediu is a great composer, and the relationship between us is not only that of composer-performer, we are friends since when we were at the Conservatory, and two of the pieces on this disc were written for me, the pieces for violin and piano, the first Don Giovanni / Juan, close to our student years, written for me and pianist Valentina Sandu Dediu, and the second piece, written later, in 2005 is the piece called A Mythological Bestiary and is a commission by the Harvard Musical Association in Boston.This piece premiered in 2006 with pianist Dana Ciocârlie.

The title of the album Hybrids, Hints&Hooks certainly reveals the hybridisation process behind the four works on the CD. Thus we explain the presence of the word hybrids in the title. Where did Hints&Hooks come from?

Juan is based largely on the structure of Mozart's Don Giovanni, but with elements from Richard Strauss's Don Giovanni. The piece for solo violin A la recherche de la Marseillaise by Stravinsky, so In search of the Marseillaise by Stravinsky is a piece that is based on the version of the Marseillaise for solo violin written by Stravinsky, so as the composer says this version is used as a setting for the Marseillaise to which Dan Dediu has given a new vision, and the animals in the Mythological Beast are animals such as the Gryphon, which is a hybrid between lion and eagle, the Hippocriff is half bird, half horse and so on. and so on. The Hints, so the allusions. The allusions are to other historical styles, references to other pieces, the allusions that connect little puzzle pieces that the listener finds in these pieces. In a way they're like the drawings we used to do as children, where we connected the dots. These are the points of connection, and Dan Dediu walks the route between the reference points. Hooks, translated mot-a-mot, a word, perhaps, not extraordinarily beautiful aesthetically. We might even call it anchors. It's the hooks that, in a way, attract the audience's attention. These hooks are used a lot in pop music. They are the little elements that attract attention and that are very cleverly used here, like little headlightsthat illuminate versions or details, perhaps unheard of, in the reference pieces that Dan Dediu alludes to, and that somehow make the listener feel, on the one hand, that he knows this music, and, on the other hand, that he is once again making a discovery.

Where will the disc be available for those interested?

Obviously on the Metier record site. I'm very excited to tell you that there is a new version of the record. It's like a plastic business card with an individual code on it. This business card can be carried around much more easily, in a world where computers no longer have this possibility or even cars no longer have CD players. This new version of the CD is absolutely necessary, it is the future of the CD. The Metier label obviously has information about this CD. The official release will be on October 8th and my website https://www.irinamuresanu.com/ will also have this information. The record can also be accessed on the divineartsrecordings.com website in three versions to suit listeners' preferences: CD, FLAC audio files or mp3 (easy to download to any electronic device) https://divineartrecords.com/recording/hybrids-hints-hooks-violin-music-by-dan-dediu/.
Interview by Maria-Isabela Nica
Translated by Denisa Dărăban,
University of Bucharest, Faculty of Foreign Languages and Literatures, MTTLC, year II
Corrected by Silvia Petrescu
Return to archived Interviews