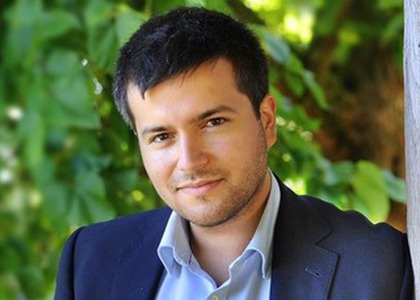 Pianist Florian Mitrea will give three recitals, in the dark, during the Unseen CoNCERT in the Dark event. Florian Mitrea is one of the most appreciated performers internationally and is currently a professor at the Royal Academy of Music in London.

Florian Mitrea, you will give three recitals during the Unseen ConCERT in the Dark event, which briefly involves giving recitals in the dark. The Unseen concept reflects the intimacy of the musical act. How do you personally find yourself in this concept?

It is an innovative concept. It is, practically, the conception of a wonderful artist, her name is Cristina Bobe, she is, let me say it, a visionary artist, who sees the concert experience from a totally different angle. Cristina is a photographer; she is a visual artist. For her, music means more of an intimate experience, a personal experience, which has nothing to do with the visual, but focuses exclusively, we could say, on the audio side and on the journey that music causes us. This fascinated me because, of course, as a musician I always work with the art of sound, and this must be the main reason why you start making music.It is a challenge, of course, it is a totally unusual thing, I never had to sing in the dark, in the absence of light, but it is a challenge that stimulated and motivated me, and I am very curious about the public reaction at the end of these events.

How are the works in the program reflected in the theme of the event?

The works in the program were chosen on the theme of darkness. We begin with a sonata by Beethoven, composed when Beethoven had already begun to deafen, we can say that the hearing is beginning to darken. It is a darkness of hearing, which in Beethoven means a spiritualization of music, a transcendence in the end. So, here's a darkness that actually opens a new gate. We then move on to Mozart, to Fantasy in D minor, which is unfinished. Here, this is a darkness that occurs near death, near physical disappearance. We will never know how Mozart wanted to finish that work. Here is a question mark in a darkness of death, of physical disappearance. Following is a miniature of Arvo Pärt, called Für Alina. Pärt wrote this work for a family friend who was going through a personal drama. Behold, it is a darkness of loneliness, of parting. And the last work, the sonata Fantasy, after a reading by Dante, by Franz Liszt, is a personification of the darkness, we could say, a darkness of Dante's hell and we reach the end, safe and sound. Basically, it reaches the key of the F major, the mystical tone, as Liszt called it, we end up saved.In fact, this was the whole philosophy of Liszt and his son-in-law Wagner, that music saves, music comes to a rescue, practically at the end of the work. The public gets saved. The event is multifaceted. It starts with a visual projection, with a contemporary music, written especially for this event and the artist, Cristina Bobe, thought this, in total. It will be an absolutely holistic experience for the public.

Did you work the works in the program especially for this recital?

Beethoven and Liszt's sonatas are part of the standard repertoire, of the instrumentI would say. They're not necessarily made for this show. The work by Arvo Pärt was requested by Cristina Bobe. He considered it absolutely suitable for this conception, but what is beautiful is the fact that music makes connections through centuries, through ideas, through philosophies. Music has this inexplicable power in fact, to express more than the score shows at the beginning and to express much more, when these connections are made with other works or other artistic concepts, asin this case, a visual concept.

At the end of each recital, we know that the public is invited to participate in a free discussion with the artists. What do you think encourages these discussions?

Of course, we are very interested in the public's reaction to this new kind of event. This concept, let's say, is in its second edition and there were some extraordinarily interesting reactions. One person in the audience said at one point that he simply imagined himself in a bright glade during the entire concert. So, in the end, it's a two-way street. Of course, we as organizers, as artists, propose a new concept to the public and we are interested in finding out how it is perceived or maybe they will have other questions that we could not address otherwise than through this free discussion, but this the kind of meeting with the public is, in fact, more and more common in Europe. It is something that is being practiced more and more and I think it is a very welcome and very advantageous thing. Basically, it breaks this barrier between musician, between artist and audience.