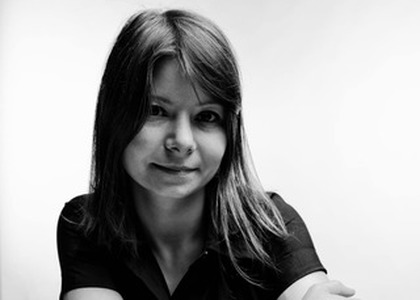 An interview about the series – Unseen. Concert in the dark – with Cristina Bobe – visual artist

"Unseen. Concert in the dark" is the title of the project initiated by the artist Cristina Bobe. This year's edition features the pianist Florian Mitrea, a professor at the Royal Academy of Music in London, and the audio-video installation belongs to Sebastian Florea.

Please tell us a bit about the significance of this concept - "Unseen".

We thought up the "Unseen" concept as a performance, in fact, which aims to offer an alternative to the way music is listened to in a public space. The project started two years ago, in 2019; right at the end of 2018, with a first concert in the space of the "Artera" Gallery in Bucharest. The intention was for the audience to be able to internalize the music more, and we tried to make this possible by eliminating the visual stimuli that rob us of a lot of attention when we watch a concert in a performance hall. This is where the project started.

Later on, as more and more concerts began to appear in our project program, it has also transformed and the idea has expanded; in the sense that I wanted to connect the arts and artists around the theme of darkness, the unseen, the unknown and this unknown side that each of us has and is afraid to explore.

In this sense, we made a first proposal this year within the "Unseen" concert, through which there are two works from the field of visual arts included in the program. It's a photo that I took in 2016, during a surgery, and it's called "Nefertiti" - it's a portrait from the exhibition "Gentle violence - Faces of changes" - and another work of contemporary art, an audio-video installation by the artist Sebastian Florea, who further builds up an electronic music work starting from this portrait, "Nefertiti", which he modifies through a software that generates sounds from pixels.

From your description I understand that we're talking about an avant-garde event. I imagine it's an unusual kind of show for the classical music audience. Is it a correct presumption?

I can say, from my perspective, that it is an experiment that we propose to the public, but also to ourselves, as artists involved in this project. In what classical music concerts are concerned, we are accustomed to artists performing on stage, the audience receiving what the artists have to offer, after which every person goes home and maybe on the way home, they talk about what they felt or how they perceived what they heard. We would like to receive feedback from the audience. And this is really something brave both on our part, I think, and on the part of the audience, to share something very intimate from the experience they had during the concert. And from this point of view, yes, I think it's an experiment.

It is also a kind of a transfer, let's say, of emotions, in the sense that the artists expose themselves and present the most vulnerable they have got in them during a concert (or, after all, any kind of show), and the audience is in a safe area, in which it receives, enjoys and that's it. And then, what I set out to do is to bring the audience on the side of the artists, to do a kind of an exchange of roles in which everyone experiences the perspective of the other, precisely in order to broaden both our self-knowledge and our knowledge of others and, in this way, to stimulate empathy. So, we hope that the audience will intervene and tell us how they perceived everything we have to offer through this project. We too don't know how it will turn out and what it will lead to in the end. This, basically, is the beauty of the project.

Did you expect the reactions of the audience you received so far? Were they positive?

What I would like to mention is that this is a project that does not aim to amaze you with anything. We are very open to any kind of feedback, including negative one, as long as it is honest. The project had twelve more concerts during 2019, in alternative spaces - in a psychiatric hospital, in a barn in a village, in fortified churches - and it ended with a concert at the State Philharmonic in Sibiu. Each concert was followed by a discussion, and these post-concert discussions have greatly enriched the project, I think. Because, from my point of view, people opened up and told us what they felt. We also received suggestions. One of them being that between performances during the concert the public should not applaud. And we integrated this suggestion for the next shows; we asked the audience at the beginning of the concert to keep quiet, precisely so that the very deeply internalized state could be maintained from one end to the other and we could all enjoy the experience. Otherwise, there have been many ways of receiving the concert so far. It differed from one space to the other - each space came with new challenges. There were people who lay on benches - for example, in the Fortified Church of Cincșor. At the Psychiatric Hospital in Călpânaș there were various reactions, I can say, in the sense that there was a lady who felt the need to dance. Other people felt so relaxed that they fell asleep. And this also is a reality that we integrate in everything that our project implies.

How would you describe the atmosphere during the concerts?

I think it is very charged. As I experienced the concerts, I felt that they amplified what I was already feeling at that moment. If I was being overwhelmed by certain negative moods, they certainly became more pronounced. In other situations where maybe I was more relaxed, happier and with a lighter heart, I felt that the concert too helped me "fly" more.