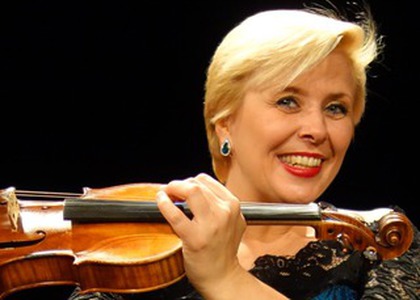 The Romanian Music Journey continues on Tuesday, October 26th, 2021, with a concert at the Romanian Athenaeum. Soprano Rodica Vică, violinist Clara Cernat and pianist Thierry Huillet propose a concert-conversation that marks the homage of some important Romanian composers, among which we mention George Enescu, Mihail Jora and Eduard Caudella. Details about the event can be found from the violinist Clara Cernat.

After concerts in Montauban, Vienna and Iasi, the Romanian Music Journey arrives in Bucharest with a concert at the Romanian Athenaeum. The program you will present is structured in three parts - Childhood, Love and Goodbye. How are these themes reflected in the selected papers?

It is a very beautiful bouquet of Romanian music. Childhood is reflected in several lullabies by Maria Tănase, Nicolae Lungu, Paul Constantinescu, George Stephănescu with The Song of the Whistle - this is the playful part of childhood - and Rhapsody Wallachia by Thierry Huillet, which contains themes from famous Romanian folklore, like Ciocârlia, Ceasornicul, guided, playful themes. Of course, it's about love that is often unshared. George Enescu is present with his lied Schlaflos on lyrics by Carmen Sylva, who was a student of Robert Schumann (few people know), but also Tiberiu Brediceanu - Bade, for your eyes, for example - a very beautiful song that Rodica Vică will sing. In fact, the program is variable geometry - there are arias, lieds and songs for voice and piano with Rodica Vică and Thierry Huillet. Some are adapted by Thierry Huillet for voice, violin and piano. And there are two rhapsodies by Thierry Huillet - Voyage and Wallachia. Voyage rhapsody also enters the theme of love; is on themes by Dimitrie Cantemir and Maria Tănase. And Goodbye, the last part of the program ... everyone would expect it to be something very sad and depressing, but it's not. It is a wonderful song by Nicolae Bretan, And those sweet regrets, and The stars in the sky on lyrics by Mihai Eminescu - Eminescu's last poem. And the concert ends on an optimistic note, with Gherase Dendrino - Aria Tu from the operetta Letmesing, because we told ourselves that love is the most beautiful adventure in human life.

You have already mentioned the two rhapsodies that you will perform together with the pianist Thierry Huillet, compositions that you have made together, on Romanian folk themes. Is there a concept that unites these two works? Did you think of them as a cycle?

Yes, it is a cycle of four rhapsodies on Romanian folk themes. The ones we sing in this tour ... Voyage, on older themes, from the 18th century, collected by Dimitrie Cantemir and on the songs of Maria Tănase; Wallachia has a majority of themes - some are by Angheluș Dinicu, Grigoraș Dinicu, Romanian folklore, Costică Pompieru ... themes that George Enescu also used in rhapsodies. And there are two other rhapsodies ... The Post Carriage - an amplification of the beautiful song that Grigoraș Dinicu sang a lot in an incomparable way - and Hora Rhapsody, which is a rhapsody that brings together only choirs from Romanian folk music. We don't play these two rhapsodies on tour, because the concept is completely different. This cycle of four rhapsodies pays homage to Romanian culture and our deep folklore.

Indeed, I wrote them together in the sense that I selected certain themes, proposed them to him and adapted them for the violin. However, all the creation of the work and the modulations and over lapping of the themes, their chaining, belong to him. It is a great emotion for me to imagine that a French composer did this out of love for Romanian culture.

The events of the tour are structured in the form of concerts-conversation on the topic Why do Europeans love Romanian music ? What do you intend to point out in these discussions?

It is the presentation of the concert; a dialogue between Rodica Vică, Thierry Huillet and me. Of course, we are talking about the richness of this Romanian music. It is a music very rich in colors, in rhythms ... it is one of the most colorful, most intense European folklores, together with the Spanish, maybe, or Italian folklore. But Romanian folklore has an authenticity ... the Mioritic space has always fascinated, and Europeans love Romanian music. Indeed, not everyone knows her, but the moment they hear her for the first time they are fascinated!