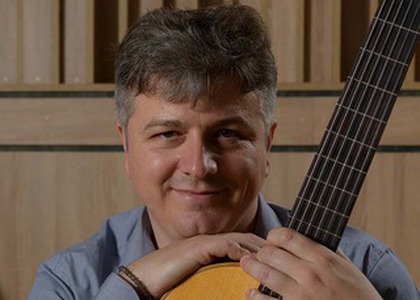 The anniversary edition of the Guitar Evenings Festival takes place between November 4th-17th in Bucharest, Sibiu and Brașov and offers the public recitals and concerts with the orchestra in which important guitarists from both abroad and Romania will participate. The program will also include a world premiere, "The Concerto for Guitar, string orchestra and 2 percussionists, op. 174", entitled "Aluvión", composed by Dan Dediu will be performed in the first absolute audition by guitarist Pablo Márquez.

This year's anniversary edition of the Guitar Evenings Festival will be opened by guitarist Pablo Marquez, who will play for the first time in the world the Concerto for guitar, string orchestra and two percussionists by Dan Dediu. It is an important moment, both for the festival and for the Romanian contemporary music. How did you come up with this idea for the opening concert?

It is a project that the Kitharalogos Cultural Association has been developing since 2012, when we started a series of concerts at the Enescu Museum, all of which under the name of Musica-Muzica, during which we asked Romanian composers to dedicate works to the guitar. The guitar was an instrument that was quite neglected by our important composers, of course, with a few notable exceptions, but the repertoire was quite poor and we considered it important as one of the directions of development of our festival to be the stimulation of the Romanian composers in dedicating works to the instrument. In eight years, about 25 new works have been composed for the guitar or for the guitar-viola version and here is this dream of mine and this desideratum of the association, to have a new concept for guitar and orchestra is now being fulfilled. Maestro Dan Dediu, together with another maestro, guitarist Pablo Marquez, one of the most important guitarists in the world of guitar, are here in Sibiu, the world premiere of this concert, entitled Aluvion. I am very happy, because it is 38 years since Dumitru Capoianu wrote the Concerto for guitar and orchestra and 25 years since the concert written by Anatol Vieru. Also, there is another non-guitarist composer from our country who takes the bull of horns, so to speak, and he writes a concert that will surely become a milestone, let's say, in the repertoire of guitarists in our country and certainly abroad.

You organized the program as usual, structuring it in two sections: concerts and master classes. What would be the news this year, apart from the world premiere mentioned above? We know that other first absolute auditions will be included.

Before we talk about the first five auditions, I would like to point out a few important things for our festival. We are talking, on the one hand, about the extension to Sibiu and to Brașov. We are also talking about the collaboration we have started with the philharmonic institutions.It is about the concert we were talking about from Sibiu, together with the Sibiu State Philharmonic Orchestra and also on November 17th, at the end of the festival we will have a concert at the Radio Hall with the Radio Orchestra with two chacchiaretta bandini.We also continued this project of stimulating our composers in writing for the instrument. Indeed, on November 16, at the Auditorium Hall of UNMB, I will sing with Ioan Bănescu, three compositions dedicated to an ensemble of guitar duo, inspired by the medieval anthem O Gloriosa Domina. These are three very appreciated Romanian composers. I am talking here about Dan Bariu, Alexandru Ștefan Morariu and Andrei Petrache and we will have another premiere, a work that Gabriel Mălăncioiu wrote four or five years ago for guitar duo and was not sung at the time, but which Duo Chitarsis will bring it to light for the first time, in the concert on November 12th at Palatul Tinerimea Română.

You offer as every year, the Kitharalogos Scholarship, which is obtained following an online contest. How did the competitors perform this year?

This year was quantitatively weaker than previous editions. We only had three competitors who performed very well. Anyway, I am happy for every young guitarist who approaches this contemporary repertoire, which has started to be published by our association in collaboration with Grafoart publishing house. So as I said, they performed very well this year, for objective reasons we gave up the Kitharalogos Scholarship gala that we usually hold at the Suțu Palace, and this year's winner will perform on November 13th with a mini-recital at the opening of the Adrea de Vitis recital from the University of National Music in Bucharest.