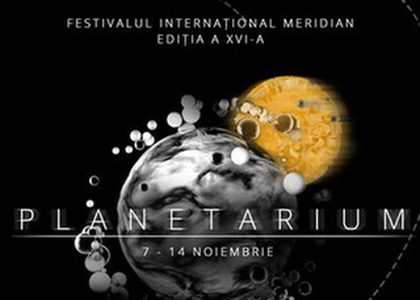 The 16th edition of the Meridian International Festival, one of the most important contemporary music festivals in Romania will be held between the 7th and the 14th of November 2021 in a pandemic-appropriate format: all of the events will be streamed online (live or through pre-recordings), while the organisers will also have the venue open to an audience.

The theme of the 2021 edition, PLANETARIUM, aims to explore the infinite auditory cosmos of human imagination and to pay homage to the musicians who have brought vital contributions to the development of the Romanian avant-garde music scene. Each concert will be organised following the model of an imaginary planet: TERRA INCOGNITA, PRO-PHILIA, ARHEE WAY, POLARIS, INTERSONAR, OMBRA, METAMORPHIA and SHOOTING STAR.

Composers Doina Rotaru and Diana Rotaru have offered more details about the series on Wednesday, 10th of November 2021 at the Perpetuum Mobile edition, organised by Lucian Haralambie.

Coming in live through the phone, composers Doina and Diana Rotaru. Welcome!

The topic we'll be discussing with our guests today at Perpetuum Mobile is the 16th edition of Meridian Festival. The series has begun on Sunday, November 7th and will take place online until November 14th. My first question is for Diana Rotaru, the art director of this series. What is this year's theme and what was the response to the first events of the 2021 Meridian Festival?

Diana Rotaru:The theme for Meridian Festival 16 is Planetarium. It is about a cosmos of imaginary celestial bodies, which aim to offer a metaphorical visual aid to our audience for every event. So, every event - whether it be a concert, symposium, or movie - follows the structure of a planet or other kinds of imaginary celestial bodies. I tested out this system during the 15th edition of Meridian Festival named Sound Gardens. That model worked on a nature basis anddid so very smoothly. One of our team's aims, which began organising the festival in 2019, is broadening the contemporary and experimental music audience - not necessarily through accessibility, but through a slightly more different publicity style and through developing a particular image around our festival, a type of structure that can give it a unique identity - within the Romanian landscape, at least.

How has the response been so far?

Diana Rotaru: The response has been positive. We were surprised at how quickly people have accepted the online format. We, of course, desired some direct contact with the audience, but with the current circumstances it's not possible, so we opted for the online version. Still, the audience is very much welcome to the live-streamed concerts - all of our events are on the Meridian Festival website. All of the concerts and events will remain on the website to be watched in the future. I think it's a compromise, but it still works. The online world has evolved massively throughout this terrible pandemic age and I believe we should adapt and take advantage of it. Speaking of the online world, I should mention that Irinel Anghel, the festival's art consultant, has invented two imaginary radio and television stations - X-radio and X-tv - and every day at the same time, AM and PM, they broadcast electronic and audio-visual works as short segment shows. This would be an addition to last year's edition of the festival.

I would like to move on to the pre-opening of the festival. Inner Ladder was dedicated to the memory of composer Octavian Nemescu through a round-table discussion on November 7th. The recording can be viewed on the festival's website - www.snrsimc.org - but I should ask, Doina Rotaru, whether you can tell us more in regard to this discussion about one of the important composers of Romanian avant-garde music, Octavian Nemescu?

Doina Rotaru:From my perspective, the allotted time for this discussion was too little, because an hour and a half was not enough to appreciate Octavian Nemescu. I believe ten conferences of this kind aren't enough either, as on the one hand we have tried to highlight all the extraordinary human qualities that Octavian Nemescu had - sensibility, kindness, generosity, tenderness, sophistication among others. Also, Octavian Nemescu the teacher, incredibly loved by his pupils and students, by everyone with whom he worked and lastly, of course, Octavian Nemescu the artist who was a composer but also a music philosopher, the pioneer of an imaginary music and an artist-philosopher with a minister's conduct, as he was also fascinated by the theological dimension of musical discourse. He has promoted musical avenues that hadn't been explored. He is an extraordinarily original character in Romanian and universal composing. I had the chance of meeting many composers worldwide and I have never come across something like him. So, we love him for his originality as well.

To reiterate, this is a round-table discussion which can be viewed on the Meridian Festival website. Diana Rotaru, how will the festival continue? What are the events for the upcoming four days?

Diana Rotaru: Something very important, as maestro Octavian Nemescu has been mentioned, who is a kind of celestial body within our festival! We have tried to pay him homage as much as we could. Tonight, at 7PM we are hosting the world premiere of Octavian Nemescu's final completed work. I am talking about Efemerida for five violins and cello - a very special work with the kind of implosive aesthetic that was one of his main preocuppaions. This will be followed by a piece in Octavian Nemescu's memory, written by Doina Rotaru for a wind quintet and interpreted by the V Coloris Ensemble from Denmark. Both events will take place as part of the Asterisms concert.

Other than that, we invite you to visit our website. It is a fairly symmetrical structure. Every day, at 11AM, X-radio broadcasts electronic music from space. At noon there are discussions, round-tables, symposiums. At 5 and 7PM there are the concerts. On the last day of the festival - November 14th- we will be having three special events. At 7PM, we will be showing a 3D animation film to fit the festival's theme - Astrosound Planetarium Observatory -directed by Alexandru Claudiu Maxim. Afterwards, a surprise shooting star, created by Irinel Angel and the same Alexandru Maxim. And at 10PM, a live-stream from various corners of the world by The Core, an improv ensemble born during the pandemic from musicians' need to collaborate with one another and the impossibility to travel and do so in person. I believe it's a very interesting event.

This last question is for you both. Why is it important to listen to contemporary music now?

Doina Rotaru: Because it's the music of our time and because people, just as they read today's literature and watch today's movies, should get to know the music written for them today.

Diana Rotaru: I completely agree. I would add that the audiences who are, maybe, a bit reserved due to some prejudice that has intensified over time have nothing to fear. It is a wondrous universe that encompasses many styles and movements. So, there are options… an almost infinite cosmos of options.