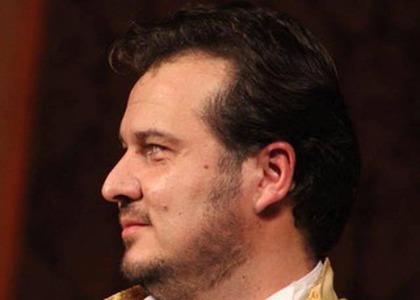 The Opera, Operetta and Ballet Festival is taking place during this period at the Brașov Opera. We find out details about the festival program from tenor Mihai Irimia, artistic director of the Brașov Opera:

On November 6th, you opened the Opera, Operetta and Ballet Festival - an event planned to take place until November 28th. What is the concept of this year's edition, and how did you structure the program?

It is an established festival for us, which we didn't want to interrupt, even though the conditions are a little bit harsher at the moment in terms of the number of shows we were forced to play on stage and the number of spectators- only 30% of the auditorium's capacity will be the happy customers which get a ticket.

On Saturday, November 6th, we started with a gala, one where we had trademark guests: Paula Iancic, AntonelaBârnat and Remus Alăzăroae - three beautiful voices. But our audience was also able to enjoy the two new additions of the Opera - and I say this proudly - two young and beautiful voices - Silvia Micu and AlexandruChiriac. And our long-established colleagues were with them - soloists Carmen Topciu, LiviuIftene and AlexandruAghenie. Everything unfolded under the baton of maestro Mircea Holiartoc, the orchestra and choir of our Opera participating as well. I tell you in all honesty that it was a gala of real success; even though it was only 30%, the spectators managed to compensate the other empty seats with their applause.

Then we will have two Saturday shows: on November 13th, "The Prince and the Pauper", on music by Ludwig van Beethoven, directed by HorațiuCherecheș (guest of the National Opera and Ballet Theatre"Oleg Danovski" in Constanța), and on November 20th we will keep the tradition and invite the Hungarian Operetta, show titled "Us, musicians' souls", together with our colleagues from the Hungarian Opera, the orchestra of Brașov Opera being under the baton of MrsIncze Katalin.

We will close the festival on November 27th and November 28th with two shows of "The Elixir of Love", directed by a new, young director, Claudia Machedon, from the National Opera in Bucharest. Almost all the cast is ours. We have only one guest, a young graduate of the Faculty of Brașov, Emilia Giol.

Of course, in the meantime, we also have recitals, performances for children and other events of this kind, but in the actual festival, these are the only five events.

As you've already mentioned, these new names of young artists appear on the poster of the Brașov Opera - at least as far as the premiere of "The Elixir of Love" is concerned. You've already spoken about the soloists Silvia Micu and AlexandruChiriac. As for the young director Claudia Machedon, whom you've also mentioned, from what I understand is that she is at her first production as an opera director. Just a month before, you were telling me in another interview that you wanted to encourage young artists. And here we are, the Brașov Opera gave her the chance to debut. What exactly persuaded you to choose her and, looking also from the perspective of the performer since you are part of the cast of the show, how is the collaboration going?

We are already in the second week of rehearsals. I can share with you that we have already been able to undo the whole work. Yes, I gave this chance to Miss Claudia Machedon. For her, it is a debut in an opera's production. The first time I've met her was in Bucharest when I had the pleasure to work together with the National Opera in Bucharest. Actually, I met her in two productions there -"The Barber of Seville" and "Don Giovanni" - where she was an assistant to the director. But by the way we worked then she convinced me and, later, by reading her CV and seeing that she worked with great directors - she was an assistant for Mario de Carlo, Ion Caramitru, Giancarlo del Monaco; even now, for Mrs Alice Barb (for the opera "Norma", recently put on stage), but for Paul Curran's "La Traviata" as well, she worked on Matteo Mazzoni's "The Barber"… She has had a lot of collaborations with important directors, and through the collaboration we've had, I saw that she gained very important things from each of them. Since she didn't have the chance to work on a whole production, I thought it was a good moment to give her this opportunity in the sense that I very,very much wish to encourage young people - performers as well as producers and everything that the field of opera means.