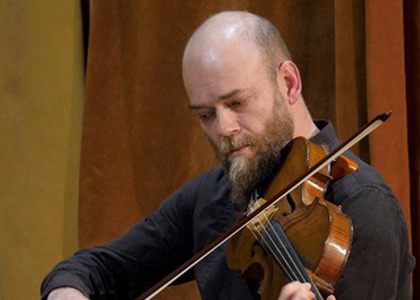 This year's ICMA Awards list of nominated discs includes CD's signed by Romanian musicians. Among these, there is the first volume of the Mieczysław Weinberg Quartetcomplete series, signed by Arcadia Quartet and Chandos record label.

How did you find out the news?

We found out when you called us. Actually, my colleague Răzvan Dumitru had found out just beforehand, but he hadn't had the chance to let us know and hearing the news was a very pleasant surprise and an honour.

What drew you to the Mieczysław Weinberg string quartets?

The idea of recording a Weinberg complete series came from the record label Chandos, whom we have signed a contract with. They suggested that after we completed the Bartók series, they would like to add this series to their portfolio, as they consider it interesting music that has gone undiscovered by the large majority of melomaniacs. We listened to the quartets after hearing their suggestion and we were completely entranced by the music, and surprised that we hadn't heard of it either. They are unknown pieces and we decided to contribute to the reaffirmation of this composer by recording the seventeen quartets that he composed.

When can we expect the next volume?

As good timing would have it, we are just beginning the second recording session today. We are recording the second CD, which will include quartets 1, 7 and 11. We usually record in spring, and in autumn the CD is already on the market, being evaluated and sent to all the specialty magazines.

How did you come into contact with this record label and how was process of recording the Bartók quartet series?

Sinead O'Carroll, our London-based general manager had been 'hunting', if you will, Chandos for quite some time. We really wished to record Bartók's quartets. We felt very close and understood his music very well. Our manager proposed our project to Chandos. They initially said they had other plans for the Bartók quartet series, but our manager insisted they come to one of our concerts in England where we played Bartók's Quartet no. 4 if I remember correctly. The label's director came to that concert to listen to us and then came up and said 'you've got Bartok's quartet series with us.' He had been impressed by how we performed Bartók's quartet and in that moment he made the decision of recording the series with them, and so we signed an exclusive contract.