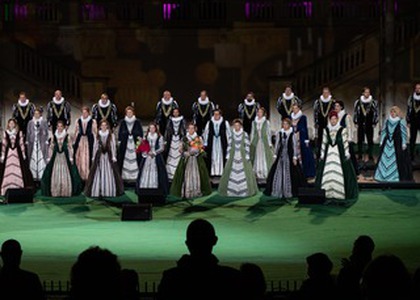 Interview with Emil Pantelimon, manager of the Madrigal Choir

The album Holy Week signed by the Madrigal National Chamber Choir - Marin Constantin is among the record projects that were nominated this year at the ICMA Awards.

What does this nomination mean for the Madrigal Choir?

It is very important that, in these difficult times of the last two years, the work that our group - the National Chamber Choir "Madrigal-Marin Constantin", conducted by Anna Ungureanu - has done to remain close to the public. So, I have to say that it was a marathon in which we managed to record two CDs last year - "Madrigal for Christmas" and "Christmas Madrigal" - CDs with which we managed to get the Golden Disc for sales at end of last year.And, this wonderful recording of the Madrigal, "Hail Maria" and "Holy Week", dedicated to the Eastern and Western Easter holidays, whichis nominated for the award mentioned above! It is a great joy, because the work - even without the presence of the public- that the Madrigal choir had to carry out enjoys recognition and the fact that, on this occasion, it will be much more promoted and spread in the homes of all Romanians and not only . In fact, this is the greatest joy, because this attribute of cultural ambassador that the Madrigal has is confirmed again with the nomination we are talking about.

In fact, we started speeding up recording albums due to the restriction of meeting live with the audience. The Madrigal's agenda was very busy before the live meetings with the public both in Bucharest and in the country, but also abroad, and due to the pandemic we could record more easily in the studio, it was more accessible and we started to record all the concerts we held for the public and to broadcast them on the Madrigal application. That's how it came about and ... not necessarily the idea, but the need to be with the public and the album we're talking about. Practically, this is how all the record productions from the last two years of the Madrigal Choir cameto light. Also it already has three record productions this year: Hail Mary, Holy Week and, next week, we launch Hora Staccato - a new record product with only Romanian music.

You talked about the need to record in the studio, this decision to move from the concert stage to the recording room. How did it affect the musicians? How do they see this change?

It was not easy at all, especially at the beginning, being used to the liveinteractions and the emotion and energy in the performance hall. But, after a very short period of time in which we struggled to find the best solution and when we began to notice thispandemic will not end very quickly, we decided very quickly to enter the studio and record .The first time was very difficult because we didn't have the audience in front of us, but then we started to get used to it and think about the joy that those who still have the opportunity to listen. Not to say that after getting the Golden Record for last year's albums, the impulse was even greater and the joy of recording them was even bigger, the energy was much better and we practically got over this discomfort of the lack of crowded performance halls. And we transitioned in the online area, in the recording area with the desire, obviously, and with the expectation to be in front of the public as soon as possible, as we will do on December 16th and 17th, at the National Opera - The Extraordinary Concert of the Madrigal Choir with many surprises, which this year is entitled "On the way to Christmas".