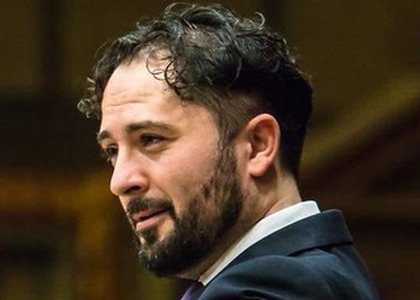 On Wednesday the 8th of December 2021, it will be 100 years since the first performance took place on the stage of the Bucharest Opera. The institution will celebrate its centenary by presenting the premiere of a new production of Richard Wagner's "Lohengrin", the title that also opened the opera house's first season, at that time under the baton of George Enescu.

More details about the new production are available from Daniel Jinga, interim general director of the Bucharest National Opera.

The centenary of the Bucharest National Opera will be marked by the premiere of a new production of Wagner's Lohengrin. The event also provides the occasion for the first collaboration with the renowned director SilviuPurcărete, and the scenography is designed by another renowned name in Romanian theatre - Dragoș Buhagiar. What were the Opera's requirements for the concept of this new production?

It is a complicated production. As we know, any opera written by Wagner is difficult to stage; it requires a great deal of effort financially, logistically and in terms of human resources. We had to bring in collaborators for the chorus to support that double male chorus. The set, as the audience will see, is monumental, in perfect harmony with Wagnerian musical writing. I don't know what else we can say about director SilviuPurcărete; he was a must from my point of view now, in the centenary year, for the most important moment of the centenary season - this premiere of "Lohengrin" which will take place on December 8.

As you said, it is one of the creations that is most demanding for the collective of an opera house and imposes a high standard of artistic quality. This time, the baton has been entrusted to conductor TiberiuSoare. Given the pandemic restrictions, what will this staging be like? Will the score be performed in full, will there be a full orchestra, will there be an extended band to provide the incidental music?

Unfortunately, we had to make some compromises. The score will be played in its entirety, but the breaks will not be for socialising, but just for set changes. For this, the set has been designed in such a way that it will be very easy to handle and change by our stagehands. I won't go into details, but the set designer DragoșBuhagiar is a specialist in this and has equipped those huge parts of the set with special wheels that make it easy to maneuver. Basically, we took care of the artistic part, but also of the compliance with the rules to prevent the spread of covid. The stage music was recorded, unfortunately, instead we had to keep four trumpets that couldn't be superimposed as a tape because they intervened at a certain point in the sound speech and would have been practically impossible to superimpose, they came with a pre-recorded tempo over something that was previously live and couldn't have happened exactly as on tape.

The cast includes both the institution's soloists and guests. Mezzo-soprano Petra Lang, who played the role of Ortrud in Wednesday night's performance, was also seen in the premiere of the 2011 production of Lohengrin. This time she will be partnered with tenor Daniel Magdal in the title role and soprano Marta SanduOfrim, who will make her debut as Elsa. The second performance of the show will bring to the audience the German tenor Benjamin Bruns, whom we know from the "George Enescu" International Festival (2019 edition), and the Bulgarian soprano Diana Gouglina, for the first time, I guess, on a Romanian stage. Please tell us, briefly, a few words about the soloists reunited in this new production!

First of all, we tried not to segregate the house soloists from the soloists we invited, and I want this to remain a habit. They contaminate each other and I'm aiming for that too; I'm also aiming for raising the standard of the National Opera's collective and a certain leap in mentality, because they clearly have value. In other words, I think there is a balance now in terms of value between what we have brought from abroad and what we offer from home and we want to keep that every time. So, as you said, every evening we have both guests from abroad and soloists employed by the Bucharest National Opera, because it's the centenary of the Opera. I'm glad that this whole mix is very natural, because music is a universal language that unites and calls us to communion; it's like they've been on that stage together for a lifetime!