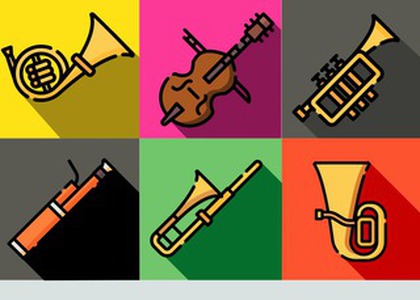 Interview with Cătălin Cretu, the coordinator of PerformArt project

On Friday, December 10th, an event marking the end of the third edition of the PerformArt project will take place on the stage of the Auditorium Hall of the National University of Music in Bucharest, starting with 4 pm. During the event, the results of this year's project will be presented and a recital will be held by the winners of the National Double Bass Competition. Details are from Cătălin Creţu, the project coordinator.

Tell me, first of all, how did the idea come about?

The idea for the "PerformArt" project came from the management of the National University of Music in Bucharest, three years ago, in a discussion with Mrs. Dean Cristina Popescu-Stănești. We had the idea to apply for a funding competition proposed by the Institutional Development Fund within the Ministry of Education. The idea is, in fact, based on a need. The fact that there are six endangered instruments; namely, the four brass instruments - trumpet, horn, trombone, tuba - then bassoon and double bass. Practically, the children do not come to study with these instruments either at the Romanian conservatories or in high schools and, obviously, it will be a problem with the orchestras in the country in a short time. And then, this is exactly what the project was trying to remedy, this dysfunction in the Romanian music education system.

What was the teachers 'reaction and how would you describe the students' response?

The reaction from the music high schools in the country was very positive. The first step was to make some partnerships with high schools, primarily in the southern part of Romania. Then last year we expanded and this year we have partnered with 35 high schools across the country, music high schools, obviously. The activities we proposed in these partnerships ... masterclasses that our teachers conducted in high school or, when possible, at the University of Music in Bucharest; was a series of educational recitals given by teachers, but also students, masters or doctoral students from UNMB in partner high schools; we even had a few symphony or chamber orchestra concerts in partner high schools; then there were some piano teacher pedagogical counseling workshops; round tables with high school principals, in order to understand what are we dealing with and alsoto identify solutions to fix some problems that are in the education system and to rebuild these bridges we were talking about, between music universities and high schools. Last but not least, we had a series of information sessions for parents, because it seems to me that it is an essential element to inform and get in touch, to keep children's parents informed of everything that is going on in this area.

We did something very important, we have fixed some intruments. With the money gained from this project we managed to fix a series of used instruments of the partner high schools - pianos, wind instruments, etc. And, at the end of the year, we invited a series of high-performing students from partner high schools to give a recital at the National University of Music in Bucharest.

Moreover, every year we wanted to bring something new, an even more special activity. In 2020, for example, we developed a modern pedagogical guide, which includes 14 specialized studies written by UNMB teachers, and this pedagogical guide was sent to all partner high schools. It seems to me that it is a very important tool for instrument teachers in music high schools in Romania.

This year we proposed a national double bass competition for all ages and it was a real success; it was an online contest. And I brought something new in terms of judging; In order to be very balanced, equidistant and transparent, we invited all double bass teachers from music universities and pre-university professors, and as honorary president we invited Mr. Dorin Marc, who is the supreme authority on double bass.

There are many, many other things that we have in mind and that are beginning to be remedied, through the discussions that we have. We are practically looking for mechanisms to solve these problems. After all, it's a chain and if a link doesn't work, then the whole building collapses. I would say that the project creates the framework for the discussion; that's what our project does. The "PerformArt" project, in fact, creates in a broader discussion on certain issues and, if desired, these things can be fixed at the system level.