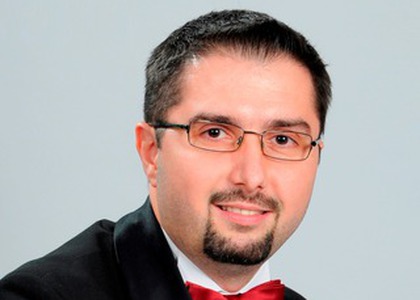 Ciprian Ţuţu - The Guest of the Week

The Academic Radio Choir will return on Wednesday, December 15th, 2021, on the stage of the Radio Hall, in the first vocal-symphonic concert of the current season. About the event, Ciprian Ţuţu, the conductor of the ensemble, talked to Lucian Haralambie during the Perpetuum mobile show:

Live by phone - Ciprian Țuțu, conductor of the Radio Academic Choir. It'
s good to hear you!

The Radio Academic Choir will return to the stage of the Radio Hall tomorrow, after a break caused by the pandemic. The vocal ensembles, by the nature of their activity, were among the most affected during this period, and in the case of the Academic Radio Choir, including the concert by which you celebrated the eight decades of activity, was held with a considerable delay. I would like to start with a question about the situation of the choir during this whole period. How difficult was it to manage such a situation, I repeat, given the specifics of the ensemble?

You noticed very well. Unfortunately, it was a very sad time for us, I must admit. Since February 2020, we have not been able to participate on the Radio stage in a symphonic vocal, which is par excellence the basic profile of our choir. Of course, there have been countless attempts - wave one, wave two, wave three, and so on. we prepared the repertoires, we thought optimistically about certain projects, but, unfortunately, we always had to give up and wait for better times along the way. Indeed, 2020 was also a year with a special burden for us. We had two anniversary concerts scheduled for the Radio Choir, and it wasn't just the eight-decade anniversary of the Radio Choir, it was a double anniversary - and the centenary of the Composers' Union. Unfortunately, it wasn't to be! We took a little revenge in the spring of this year, when we managed, under special conditions, to hold a concert without an audience after a period of rehearsals rather on parties and a reunion on stage only in the last-minute - a concert where we noticed all of the lacked rehearsals, but at the same time, the positive part was that we sang with a fantastic appetite and it was a concert with a very good artistic and professional result, in which we enjoyed the music together. And, of course, it was then that fantastic tour de force for us, on the occasion of the anniversary edition of the "George Enescu" International Festival, when we had the joy and honor to participate in four concerts with great orchestras of the world and, of course, with very well-known conductors from all over the world. So, a period with mixed feelings, with hopes sometimes suppressed, but sometimes revived, as is our mood in this period, given that, at the beginning of this month, we manage to meet and have the joy of holding two concerts on the stage of the Ascum Radio Hall in December.

We are hoping for a resumption of pre-pandemic concert activity. The Academic Radio Choir will perform tomorrow the first vocal-symphonic concert of the current season, together with the Radio Chamber Orchestra conducted by David Crescenzi. What are you proposing to the audience tomorrow night?

It is an integral Bach program, and us, the Radio Choir, will perform in the second part of Bach's Magnificat concert, his first religious vocal-symphonic work. And we are happy to meet again with the Chamber Orchestra, to meet again with the maestro Crescenzi and, of course, to promote the values ​​that the Radio Choir itself holds both as a whole and individually, by ensuring that the soloist grid is guaranteed. The five soloists are members of the Radio Academic Choir.

I will ask you to name the five.

Sure. Georgiana Simonov, Monica Olteanu, Claudia Caia, Nicolae Simonov and Cornel Popușoi are the five soloists we have proposed for this concert.

Then, a week later, on Wednesday, December 22nd, you will give a Christmas concert, this time with the National Radio Orchestra. What are you preparing for the last event in 2021 at the Radio Hall?

This is also a very beautiful, colorful concert, proposed by the master Horvath from the Hungarian Opera in Cluj, an old collaborator of ours. By the way, just as a small parenthesis, I must note that the personalities of the two conductors that we have the joy to have at the conductor's desk in the two concerts, in their activity, or rather, the choir occupies a special and outstanding place and we feel this to the fullest, working with them every time bringing us great joy and professional satisfaction. So, going back to next week's concert with the National Radio Orchestra, in the first part, the choir will perform two titles from Handel's Messiah Oratorio, and in the second part of the concert you will be able to listen to some unique arrangements that belong to the conductor of this concert. These are well-known themes, but in very harmonious harmonic and orchestral costumes.

It should be mentioned that the two concerts - both tomorrow night and next week - can be listened live on Radio Romania Music starting at 19.00. Ciprian Țuțu, what does the calendar of the Radio Academic Choir largely looks like, as much as you can tell us at this moment, when we talk about the concerts in 2022?

Of course, until now we were used to having a complete or certain picture of the whole season. We have a sketch for the second part of the season and we sincerely hope that this sketch will become a reality and, moreover, that the titles that are already proposed will be joined by other projects. But as the second part of the season is for the Academic Radio Choir at the moment, I can say that we will have a series of concerts with the Radio Chamber Orchestra and I could mention a few titles - Harmoniemesse by Haydn, Dixit Dominus by Handel or Mozart's Great Mass in C minor. But also some titles with the National Radio Orchestra - Petite Messe Solennelle by Rossini. Probably a more special concert towards the end of the season. I don't want to reveal its contents yet, but it will be very, very special. Let's hope we can perform it. And also, what is important for us every year, the promotion of local music during the International New Music Week, we hope to be able to resume this concert series for the second half of May. In addition to these proposals, we certainly have a concert of the chapel in our project, which will include works from the negro spiritual repertoire. So, it's a pretty consistent and quite generous half-season,, and hopefully no more waves will come that will get in our way.

We hope that the second part of the season will be much, much wealthier and much calmer in all respects.

Ciprian Țuțu, thank you for your presence in Perpetuum mobile!