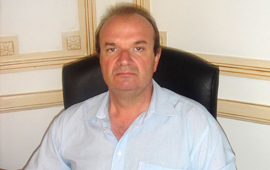 Bucharest in the Rhythm of Flamenco

Between February 4th and March 8th, 2011, there will take place in the Capital the second edition of the "Classical Flamenco and its New Genres' Festival", organized by the Spanish Embassy in Romania and the Cervantes Institute of Bucharest. We will find out more information on the programme, the invited artists and the influence of flamenco on Spanish culture from Mr Juan Carlos Vidal Garcia, Director of the Cervantes Institute of Bucharest, who has given us an interview on these topics.

The second edition of the Flamenco Festival in Bucharest begins. As the organizer of this event, what can you tell us about the programme prepared for these festival days?

The festival follows the format of the previous edition. Our intention is to present to the Bucharest public in particular, and to the Romanian one in general, a version of flamenco as art, a historical and traditional art, but at the same time, one that has the ability to turn itself into an inspiring element for other cultural and artistic events. This can be observed throughout the 20th century, as well as at the beginning of this century. Flamenco as a source of inspiration can be seen in contemporary dance, in cinema, as well as in classical music. The programme of this festival is made up on this line, being underlain by an ample, cultural and historical view on flamenco, which combines tradition and modernity.

What will we be able to hear and see during the festival?

The programme follows two important lines, which are based on two distinct generations of flamenco performance. In the first section, you will be able to watch and listen to prestigious singers, dancers and guitar players, at Arcub, on February 4th, 5th, and 6th. I am talking about singer Jesus Chozas, guitar player Rafael Andujar and dancers Ana Alonso and Juanma Carillo. Next, on February 9th, at the Romanian Athenaeum, and on February 10th, at the Radio Hall, guitar player José Maria Gallardo del Rey will give a recital of flamenco guitar and classical guitar inspired by flamenco.

On February 16th, Rosa Torres Pardos, the most famous Spanish pianist at international level, can be listened to at the Romanian Athenaeum, where she will perform the Andalusian works of the Iberia suite by Albeniz, a magnum opus for piano, also inspired by flamenco music.

Another very interesting event will take place on February 21st and 22nd, at the Radio Hall: two recitals given by violinist Ara Malikian and guitar player José Luis Monton, who will perform fusion, in which the limits of flamenco are pushed until they mingle with Oriental rhythms. As a matter of fact, Malikian, who, although Spanish, is of Armenian descent, is one of the innovators of violin music, alongside Nigel Kennedy. Therefore, it will be a violin and flamenco guitar recital.

The second dimension of the festival is meant to take place on February 25th and 27th, in the same Arcub, where a group of teenagers from the town of Jerez, called Soniquette, can be watched and listened to. They are members of an association which aims at promoting flamenco as occupational therapy and education in various Jerez districts. They are truly good, and I warmly recommend them to everyone, because you will not regret it.

Between March 4th and 8th, the retrospective of the image of flamenco in cinema will take place, through popular films and documentaries on the subject of flamenco.

We love flamenco for its beauty, its sensuality and the vital passion it transmits. However, what does flamenco mean for the Spanish?

I think there are more points of view and different perceptions. Flamenco is a great expressive art, and obviously, for that reason, there are a multitude of connotations, and a great deal of copies and versions can be made, just as postal cards are made for tourists.

In my opinion, flamenco is the greatest source of inspiration for Spanish creation, and I am not referring to the Spanish territories only - one of the greatest flamenco dancers was Catalan, for example. Essentially, flamenco is a Spanish art, and, although it is sometimes identified with Andalusia, it can be found and developed all over Spain, but, above this, I think it has decisively influenced Spanish culture, pervading all arts, poetry, literature... It also influenced the Spanish musical avant-garde from the beginning of the 20th century, including De Falla, Albeniz, and Rodrigo to some extent...

Another important wave of flamenco inspiration has taken place in the last decades, influencing modernity, the present day. One of our best and youngest contemporary writers of classical music, Mauricio Sotelo, uses flamenco as a source of inspiration for his works. Jesus Villa-Rojo can also be reminded, as he is one of the classics of the Spanish musical avant-garde of the '50s. In conclusion, I think that in order to feel the flamenco, one must also consider it from this point of view, and that is what we are trying to do in Bucharest.