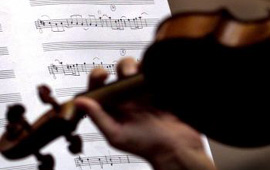 String Quartet no. 5, composed by Wilhelm Berger, was performed Sunday, February 13th, at Lille. This piece was included in the recital programme by violinist Alexandru Diaconu, who takes part, for the first time, in an ensemble of musicians from the Lille Philharmonic. In this interview, we will find out what prompted his choice, along with other details regarding the recital.

You intend to present a Romanian musical piece to the French audience. What made you decide on the composer Wilhelm Berger?

First and foremost, I was well acquainted with Wilhelm Berger, who was my quartet teacher for several years. He was a notable individual, held in high regard by the society of Romanian composers and he is also acknowledged abroad. I, for one, remember him with great affection. I suggested this work to the organizers of the "Chambre à part" Festival in Lille and it became part of the Sunday morning chamber music programme, at the Auditorium of the National Conservatory of Lille.

How difficult to perform is the String Quartet no. 5 by Wilhelm Berger for a foreign musician? What were the difficulties that your Quartet colleagues encountered?

I don't find there to be any particular difficulties. The musicians are of the highest calibre and we "set it up" in a very short time span. It is a clearly written quartet, in a style that resembles folkloric language, though not in a noticeably overt way. It has a classical form, in four movements. From a technical point of view, it has, of course, numerous challenging parts in all areas, but this doesn't pose a problem for an outstanding musician. This piece can be performed on any great stage in the world. I wished to include this quartet in the programme as homage and a personal moral obligation.

How would you describe your collaboration with your quartet colleagues?

It was very good, although there are only a limited number of practice sessions. Here, chamber music isn't done the way I did it in Romania. Yet, even under these circumstances, I am very glad to work on this composition and especially with such fine people, who are much younger than me. I'm happy to be able to help them discover a piece which I consider to be beautiful and bright.