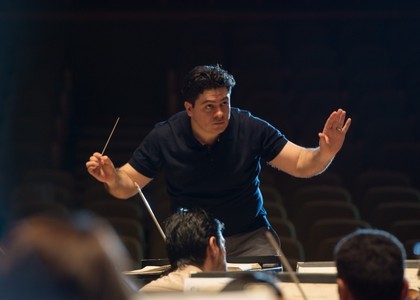 Cristian Măcelaru and a complete Brahms programme - at the Romanian Athenaeum

Thursday, 28 January 2016 , ora 13.12
The conductor Cristian Măcelaru is invited by 'George Enescu` philharmonic inthe concerts included this week (28th and 29th of January 2016) in the Bucharest musical institution season. Cristian Măcelaru told us a few words about the programme that is entirely dedicated to Johannes Brahms` work:

Brahms` music has always been one of my favourite types of music. Brahms is maybe the most remarkable composer of the German Romantic School. Among the works that we will present today and tomorrow at 'George Enescu` philharmonic we will bring a world maybe a little mystical in Brahms` music. A great number of his works focus on this idea of destiny and of our fight as humanity and as individual personalities against the destiny and of this inequality, between those who have a happy destiny and those that do not have this kind of destiny.

We look through the four Brahms` works that we present and we see this progression of idea of destiny. We begin with a work that is performed less -`Nanie`, which is a work for choir and orchestra, a vocal-symphonic work, a lament for this theme, on this idea of our volatility as people.

We continue with a very well-known work where we have as a soloist an extraordinary mezzo-soprano; she comes from the same city that I also do, from Timişoara, we are both from Banat, but in present she works in Vienna, at Staatsoper - Aura Twarowska. She will perform Rhapsody for alto, orchestra and male choir. It is a work more pleasant, more harmonious; it was dedicated to Clara and Robert Schumann`s daughter and it rather an intimate work, but very, very beautiful.

In the work of the last part we return to the whole choir and this idea of destiny because one of the most remarkable idea in `Song of Destiny` - Schicksals- lied- that express very well this Brahms` misunderstanding or refusal to what happens in the life of a man . He knew and also had the faith that the things are predetermined in a way that, as the text also mentions, we are alike the water between the stones; we throw ourselves from one stone to another and everything is already prescribed, predestined.

We will return to this idea of destiny, but this time in the performing of Symphony no. 1, a symphony that is well-known, adored very much by the audience. It is a work that Brahms tried to write over more than ten years, due to the fact that he was he felt so much in the Beethoven`s shadow, reason why it was very hard for him to write a symphony. However, it is an imposing work, a work full of optimism especially in the last part and is an entire journey from the first notes until the last ones. In a way, we get to resolution at the end of the concert, where passing through these themes of destiny, we finally get to the end. In the last part of the Brahms 'symphony, it was written in the manuscript about his apprehension that as people we are submitted to the destiny, but we all are a single being. It is the same idea that Beethoven had in the Symphony no. 9..`let us all people come, the entire humanity...we are together, we are brothers.` It is the same idea that Brahms had in the Symphony no. 1 and what he wrote was making reference to the idea that in religion the Trinity - Father, Son and Holy Spirit - are one, so we, mankind , are actually all one .

I invite you to come at this concert this evening or tomorrow evening, at the Athenaeum, to listen to `George Enescu` Philarmonic performing Brahms`s music.