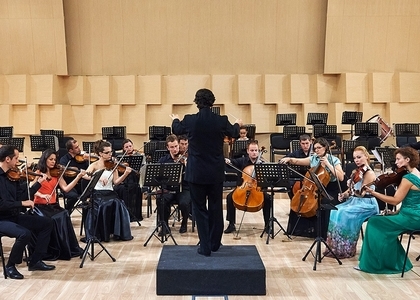 Kamerata Kronstadt will Perform its First Concert at 'Mozart Festival'

Monday, 1 February 2016 , ora 10.00
The first concert of the second edition of "Mozart Festival" organized by Braşov Opera will be performed by Kamerata Kronstadt. Cristian Oroşanu, the conductor of this ensemble was kind enough to offer us an interview about this first event.

Kamerata Kronstadt performs during the "Mozart Festival" alongside Gabriel Croitoru- the soloist. What is the concert`s schedule from the Patria Hall?

I chose for this second edition of "Mozart Festival" organized by Braşov Opera- a festival which is opened on Wednesday, 3rd of February, at 19.00, at Patria Hall- four works which two of them are from Mozart`s childhood- Symphony No.2 in B flat major and Symphony No.4 in D major. On the other hand, it is possible that Symphony No.2 in B flat major is not composed by Wolfgang Mozart but it is very likely to be Leopold Mozart`s composition. That is why the composition seems to appear in Leopold Mozart`s work catalogue. No one can guarantee this aspect but I found it very interesting to work on these two symphonies- one which is probably composed by Mozart`s father or by Mozart himself at the age of 8 and the second symphony Symphony No.4 in D major, which was clearly composed by Wolfgang Mozart, at the age of 9. And beside these two childhood works, there will be another two maturity works; Adagio and Fugue in C minor and Violin Concerto No.5 in A performed by Gabriel Croitoru, whom I have a longtime collaboration with as a conductor. I believe that 20 years ago I conducted the first concert with him. I was very pleased by his invitation. He comes with a lot of joy to perform in Braşov and we are also very pleased to collaborate with him. I also see that the audience was very positive about this collaboration; there are only 40 tickets left so this means the hall will be full.

What are the other concerts performed by Kamerata Kronstadt at the beginning of 2016?

Our next event is on the 30th of March and is a reiteration of the symphonic tango whom I`ve made with Analia Selis and Mariano Castro in November and all the tickets were sold out two weeks before the concert and a lot of people asked us for a reiteration. So, I could say that at public`s request we will repeat this project with an Argentinian bandoneonist who will perform during the concert and with two dancers from Braşov, which I heard that one of them is a world champion at tango. The event will have a few extra elements, which is obviously much more interesting for the audience in Braşov.