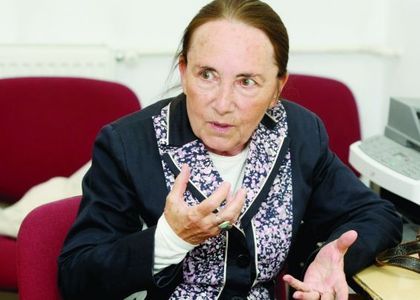 Monday, 14 March 2016 , ora 11.44
The city of Bucharest joins the international initiative `The Week of Sound`, between the 14th and the 20th of March, for its first local edition. During this event the public will have free access to a series of concerts, films, conferences and exhibitions, with guests form France, Austria, Belgium, the US and Romania. Artists, musicians, film makers, sound engineers and ethnologists will «set in frame» and analyze from different perspectives the sounds that fill nature and the public and private life, aiming towards the repositioning of sound in global context and its reinterpretation from a social perspective.

The official opening event will take place on the 14th of March, at 18:00, at Gabroveni Inn/ARCUB, inaugurating the sound installation with the contribution of Baptiste Bohelay (France) and Modulab (Romania), in the presence of the organizers, the guest artists and the sponsors of the event.

Speranţa Rădulescu, a professor at the National University of Music Bucharest and an honorary guest of the series, will be hosting one of the conferences of the project entitled `The Week of Sound` - Friday, March 18th, at ARCUB.

What is this event all about?

It is about the series or collection of albums entitled `Ethnophonie`, which is produced by the Romanian Peasant Museum in collaboration with the `Alexandru Tzigara Samurcaş` Foundation - it includes 26 albums of rural and urban music, up to this moment - most of which consist of Romanian music, but also that of ethnic minority groups - that aim to mirror the oral musical tradition of our time, starting with the turn of the century.

The series began in the year 2000 and the first album was entitled `The End of the Millenium in the Romanian Village`. At that time this was the project, but along the way we understood that we should also include the urban, because lately creativity, together with the rural population, has clearly shifted towards the city, and here there is a seed of renewal which is worthy of note for us all.

The music is very beautiful, and anthological, we believe, the best that the Romanian people have to offer, with high quality from an aesthetic point of view and also it makes the junction with the past, one that has a rich oral tradition of music. To give a few examples, some titles belong to a band, a traditional taraf - the taraf from Clejani from their beginnings in 1991 - others are particular to some region, the regional thread of a certain cultural area. In this regard, the albums produced in Gorj are special. Others are dedicated to a dying genre, as is the case with the epic song; we have a wonderful ballad writer from Teleorman. Others are dedicated to unusual instruments used by the Romanian people, which are ignored by the great majority of Romanians - this is the case of an album dedicated to peculiar instruments from around the Transylvania region. They are very varied and each album comes with a comprehensive explanatory brochure, because this music requires explaining, which is only natural, seeing as this is regional music, because our traditional music is this way - regional and not national. We have these explanatory brochures, half in Romanian and half in English so that everyone can understand what it is about - how it is played, who is playing it, on what occasion, what it signifies.

This collection has received two international awards, which resonated poorly in Romania: one of them is the `Coup de Coeur` Award from the Charles Cros Academy and the second - the German Record Critics' Award, for a particular album which was quite interesting, with music form the Aromanians from Albania.

I recommend that everyone should buy these albums, not that the public is rushing to buy them, because it is clear that our usual audience will always be drawn to the latest and out of the ordinary releases, however, people with a certain taste for the music of their grandparents or great-grand parents, in the case of younger people, should not miss this picture of the sound of the Romanians, which we have tried to depict in our collection entitled `Ethnophonie`.