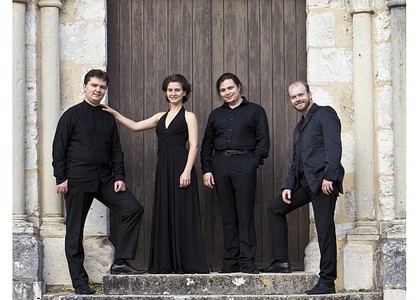 The Arcadia Quartet is playing at the EuroArt Festival

Monday, 18 April 2016 , ora 9.12
The Arcadia Quartet will be playing on Tuesday, the 19th of April 2016, on the scene of the International Chamber Music Festival EuroArt, organised in Prague. Chamber music and young talents are being promoted thanks to a series of concerts performed monthly between September 2015 and June 2016. With this occasion, the music enthusiasts are invited to the famous edifice of the Lichtenstein Palace. The EuroArt vision is to continue the festival's development as a way to communicate musically and for intercultural exchanges to take place, being played chamber music from the whole world. The violinist Răsvan Dumitru has spoken about this presence in the Czech Republic's Capital in the column "The interview of the day".

You'll be playing tomorrow during the International Chamber Music Festival EuroArt. What the story of your invitation?

This invitation came from Mr. Josef Kekula, this festival's organiser, whom we try for aproximately four years to schedule a concert and it's been very hard because of our own schedules and the dates suggested for the festival which until now didn't match with our activity. We're glad that we finally succeed in participating at this important festival.

There will be a diverse programme; will start with a quartet by Joseph Haydn- op. 1, no. 1 in B-flat major, "The hunt", then we'll also sing the first quartet by Beethoven, but the number 3 one- Quartet no. 3, op. 18. Later on we'll sing four bagatelles by Răzvan Metea who is a composer from Cluj, a very good friend of ours who has also been our professor while we were students. It's actually our second collaboration ; we liked very much the way in which we collaborated. He gave us joyfully these four bagatelles which he composed while he has been a student. We'll end the concert with the Quartet no. 4 by Bela Bartok.

How's the schedule of the Arcadia Quartet after the performance in Prague ?

After Prague, we'll go playing in Iaşi for the first time ; we'll have a concert in Biblioteca Centrală Universitară. Then, next week, we'll have a concert in Sighişoara, organised by the "Academia Sighişoara" Festival. May will also be quite an eventful month. We'll come to Bucharest on the 17th of May for a concert at the National Arts Center "Tinerimea română". We already collaborate with them for a year now and we're really thrilled by this. Later on, there a concert in Saarbrucken at the Music University and then at the International Festival "Grafenegg" in Austria