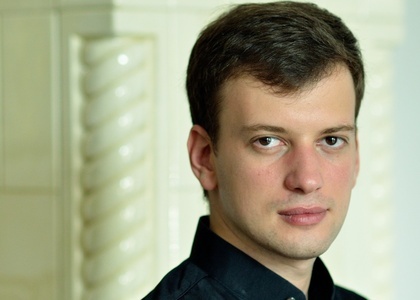 Thursday, 12 May 2016 , ora 11.49
The two weekly simphonic concerts included in the show of the "George Enescu" Harmonium bring Mihai Ritivoiu on the Athenaeum's stage on the 12th and the 13th May 2016. The winning pianist of 2010 of the Lipatti contest our radio has organised and the winner of 2011 of the International Contest "George Enescu" was recently awarded the Golden Medal from the Beethoven Piano Society. He has many concerts presently in places such as Saint Martin in the Fields and Steinway Hall in London. This week, in Bucharest, Mihai Ritivoiu will be playing being conducted by Jin Wang. You'll read more details in an interview with Mihai Ritivoiu.

Besides the fact that I'm playing with a very good orchestra, the first one of this country, the emotional meaning is special, because I grew up going and listening the concerts of the "George Enescu" Harmonium. This opportunity of being finally the solist of this ensemble is an extraordinary joy and a special moment for me.

You've chosen a difficult concert which I know you'll be singing for the first time. In fact, it is also the first time when you approach a Prokofiev concert. Why this Concerto no.3 and how would you describe it?

It is indeed the first Prokofiev concert which I a playing. The more I studied it, the more I've been convinced it is an extraordinary work. It has some absolutely perfect proportions, i could even say classical. It is in a way very well anchored in classicism- speeking of form, proportions and style, but still extraordinarily modern, very diverse, with a romantical theme, almost Rahmaninovian, in the middle of the third part, in a very surprising way. It is a difficult concert, with an ingenious orchestration and that's why it is hard for the orchestra, the solist and the ensemble. But the satisfaction of a successful collaboration is greater.

Let's talk about this collaboration. How is it going so far with the orchestra and the conducter Jin Wang, before the concert?

I met the conducter Jin Wang for the first time on a Tuesday evening, for a sound check-up. After that, the first rehersal with the orchestra has been on the Wednesday morning. We got along very well and we easily decided upon concert details. The orchestra sounded extraordinary and it was a pleasure since the first rehersal.

What can you say about your plans? When will we listen your music again in Romania?

I am really glad to return in Romania pretty soon, in September, for a concert at the Athenaeum, at the opening of the International Contest "George Enescu". It is about the Triple Concert for piano, violin, cello and orchestra by Ludwig van Beethoven. On stage I'll have beside me other two former winner of the Enescu Contest and great musicians- Anna Ţifu, violin, and Valentin Răduţiu, cello, the concert being conducted by the maestro Horia Andreescu. And right after that, I'll be having a small tour which will include three recitals in Japan, in Hokaido Island, with songs by Beethoven, Chopin, Liszt.