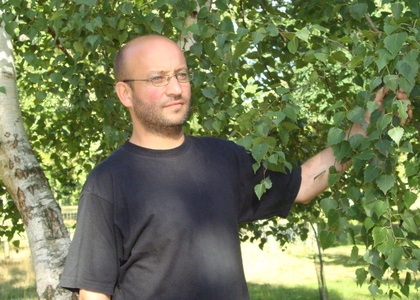 Speaking with the composer Cătălin Creţu

Wednesday, 7 September 2016 , ora 11.06
The composer Cătălin Creţu will present these days two unique projects, one during the Electric Camp festival in Italy and one in Romania. We found out details right from the musician.

|
Mr. Cătălin Creţu, you are very busy these days, you have two projects going. Can you tell us what they're about?

For the first one I have to go to Venice to an international art festival where I will present an audio-visual, interactive installation helped by the visual artist Ciprian Ciuclea, the journey being supported by the Romanian Cultural Institute in Venice. The second one is a collaboration with the poet Svetlana Cârstean during the European Literary Night, in Bucharest.

For the European Literary Night what did you prepare exactly ?

We started from the poem volume of Svetlana which is called "Gravity/ Gravitaţie" and which impressed me very much, and I tried to create some kind of a new shape. It is an artistic area where the letter marries the vibrant sound. It is some kind of a sonorant poem, it is the syllable's music. I basically took the poetic text and I broke it being helped by the computer, I made some algorythms which decomposed the text and at one moment, the word, the syllable, the phoneme are nothing but sounds. It is some kind of a literary-audio composition.

So you've found a way to mix literature and electronic music?

Something like that. Maybe there are also some post-dadaist reflexes, but obviously still using the entire arsenal of new technologies.

What are your other plans?

The next project will be during the International Festival of New Arts INNERSOUND which takes place at the end of September where, among other contemporary artists, I will perform at the piano something that includes the new technologies.