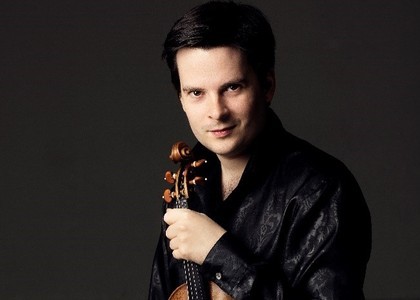 Friday, 16 September 2016 , ora 9.23
For a long time, I've wanted to get to know the violinist Ștefan Tarara better. He is German and has Romanian origins and in 2014 has won first prize in the George Enescu International Competition.

We met on a double occasion: on the 18th September, Ștefan Tarara will be the protagonist of a concert within the George Enescu International Competition of 2016, an acknowledgment of the values put into the international circuit of this prestigious competition. We will also talk about the new disc, 'Childhood Impressions', signed by Ștefan Tarara, where we find only George Enescu's music - the first two sonatas for violin and piano, together with the suite 'Childhood Impressions', recordings together with his wife, the equally talented pianist Evelin Vakova Tarara. The disc was released on the 24th June, 2016 and is included in Radio Romania Music's Vote the Best Classical Album of 2016 Campaign.

In fact, 'Childhood Impressions' is Ștefan Tarara's second disc that competes in the contest for 2016's classical music disc in Romania and the second that includes music by Enescu: the first, 'The Sound of 20's' came out in July 2015 and includes Enescu's Sonata No. 3 in Romanian Folk Style.

I invite you to get to know Ștefan Tarara better on Monday, 19th September, from 17:05 to 18:00, live on the radio, audio live, but also live video on Radio Romania Music's site.