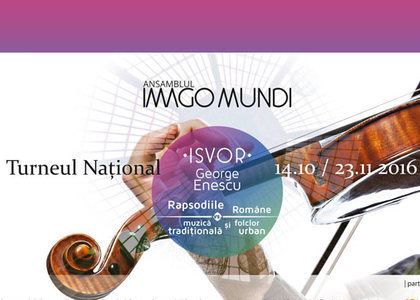 Wednesday, 12 October 2016 , ora 9.13
The Cultural Association presents, between 14th of October and 23rd of November the National Tour of the ensemble Imago Mundi 'Isvor. George Enescu: the Romanian Rhapsodies versus traditional music and urban folklore'.

The project - that was enthusiastically welcomed in New York, London, Estoril, Salzburg, Tunis and Granada - analyses the inspiration sources used by Enescu and creates a parallel between these and the wider context of the traditional/urban/ Wallachian creations of the 19th century. The plays are highlighted through the dialogue of the old instruments that belong to the Romanian culture (cobza, Jew's harp, drum) among with the modern classical instruments (flute, oboe, violin, guitar, cello). Daniel Ivaşcu, the member of the ensemble Imago Mundi, spoke about this project:

Our tour represents George Enescu`s music, especially the sources that led to the Romanian rhapsodies, the themes that George Enescu used in the Romanian rhapsodies, such as the traditional music and the urban folklore - those themes and many others that the Imago Mundi ensemble has performed in a personal manner. They are Imago Mundi original compositions.

One of the concerts will be held at the National University of Music from Bucharest. Can we speak about a target audience - and here I make reference to students - or the tour is dedicated to everyone?

The tour is dedicated to everyone, but the fact that we will perform at the National University of Music from Bucharest is not random. We wish for this concert to be addressed also to students. However, another concert from our tour, the one from Cluj, will be held at the Auditorium hall of the ` Babeş-Bolyai` University. Thus, yes we wish also this educational component.

The tour begins in Ploiesti. We have already spoken about the concert from Bucharest and about the one from Cluj- Napoca. Where else does this tour will be held?

There are ten concerts in ten cities. Indeed, it begins on 14th of October in Ploiesti, and then on Saturday at 17.30 we will perform at the National University of Music from Bucharest. There will be many other concerts at `Oltenia` Philarmonic from Craiova, the Philarmonic from Ploiesti, in Sinaia, Campina, Timisoara, Arad, and Sibiu. The last concert will be held in Cluj-Napoca.