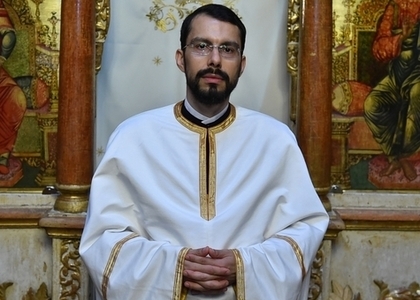 Thursday, 27 October 2016 , ora 9.53
On Thursday, 27th October 2016, in the 'Teoctist Patriarhul' Aula Magna of the Patriarchate Palace, the national stage of the 9th edition of 'Praise the Lord' Church Music Festival-Contest will take place.

Father George Jambore, there is a very special event taking place at the Patriarchate Palace which blends faith in God with music, the national stage of the 'Praise the Lord' Church Music Festival-Contest, at its 9th edition. How have the choral ensembles that have reached this final phase been selected and who are they?

What must each of the choirs interpret?

Three musical works of their choosing. A religious orthodox work from the Romanian repertoire, an international repertoire religious work and a Romanian folklore-inspired work. Moreover, the finalist choirs will give their answers to churches, monasteries in Bucharest, during the Divine Liturgy on 27th October, with the occasion of the Feast Day of Saint Demetrius the New, protector of Bucharest.

Will the winning song too be interpreted in the composition section?

On 6th October, the jury members, and I can name them: Mr. Constantin Arvinte - composer, Ph.D. University Associate Professor Diana Vodă and Ph.D. University Assistant Professor Florian Costea from the National University of Music Bucharest, assessed the works of eight Romanian composers. Four of these will be awarded prizes at the festival-contest on 27th October, at Patriarchy Palace at 18:00. I am speaking of Mr. Marcu Șerban from the 'Gheorghe Dima' Music Academy in Cluj-Napoca, who won 1st place, then archdeacon Father Ștefan Constantin Răzvan from the Orthodox Theological Seminary in Bucharest, who won 2nd place. 3rd place was won by Mr. Alexandru Ștefan Murariu, from the 'Gheorghe Dima' Music Academy in Cluj. An honorable mention went to Mr. Horațiu Alexandrescu from the Orthodox Theology Faculty in Constanța. The event aims to contribute to a better knowledge of God, to a growing unity between the youth. We support authentic interpretations of church music, and try to promote talented church music groups. Section A's jury members are: Ph.D. University Assistant Professor Valentin Gruescu from the National University of Music Bucharest, Professor Vasile Negură, choir master of the 'Fantasia' Chorale from Vaslui, Professor Iosif Fritz, choir master of the 'Apullum' Choir from Alba Iulia, Professor Father Vasile Stanciu, dean of the Orthodox Theology Faculty in Cluj-Napoca, Mrs. Manuela Enache, choir master of the 'Oltenia' Philharmonic's Academic Chorale in Craiova and University Professor Sabin Păutza.