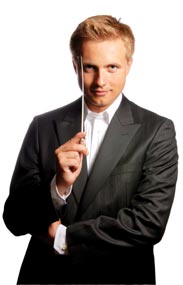 Thursday, 5 February 2009 , ora 10.13
After Melbourne and Michigan, there came the turn of Enescu's works to be performed in Liverpool too, on February 4 and 5. The Russian conductor Vasili Petrenko included the Romanian Rhapsody No. 1 by George Enescu in a program dedicated exclusively to the rhapsodies. This way, the Romanian Rhapsody opened the concert evenings, being followed by Rachmaninoff's Rhapsody on a topic by Paganini, by the 'Rhapsody in blue' by George Gershwin, and, in the end, by Maurice Ravel's Spanish Rhapsody. Vasili Petrenko offered an exclusive interview for Radio Romania Muzical, in which he talked to us about the great Romanian composer.


One of the reasons that determine people to come to the concerts is to hear classical compositions with which they are familiar. Why did you choose to open the concert with Enescu's Romanian Rhapsody, since the British audience is not that familiar with it as with the other rhapsodies of the program?

I believe that, unfortunately, Enescu is a bit underestimated. I consider him to be a wonderful composer and I admire him very much. Moreover, I think that, if the audience were offered exclusively compositions by Tchaikovsky or Beethoven, it would get bored at a certain point. It is as if you offered it only the dessert instead of the whole menu. Also, I think a repertoire which is as varied as possible should be approached, so that the horizon is permanently widened. The Royal Liverpool Philharmonic has a very flexible policy regarding the performance of the modern compositions. Last year alone thirty first auditions of such works took place. The audience already trusts us; it realizes that the compositions we offer are very beautiful, although less known.


Is it the first time you have conducted the Romanian Rhapsody No. 1? If it is not, with what other orchestras have you performed it in front of an audience?

It is not the first time. Eight years ago I conducted it in Besançon, France, with the Strasbourg Orchestra, then, three years ago, with the Luxembourg Orchestra. Then it was in honor of the accession of Romania and Bulgaria to the European Union, and many important figures of your country were present there.


Where did you find the most enthusiastic audience reaction to Enescu's Rhapsody?

All audiences were charmed at it. It is a very appreciated and beautiful composition, it is easy to understand all over the world. It is bright, it is one of Enescu's masterpieces. It is not that well-known, but I try to bring it to the limelight.


Does your repertoire also include other works of Enescu?

Yes, I have also conducted the first orchestral suite, and I want to conduct Symphony No. 1 this season.


Have you ever planned to make a broadcast of the Romanian Rhapsody or other Enescu scores?

Not for the time being, but we do not exclude this possibility. We have so many broadcasts to make now and it is hard for us to plan one more. For instance, we will broadcast a Shostakovich Integral. A lot of music by Elgar. In two or three years, I will probably love to broadcast this composition.


When interviewed, other musicians said that Enescu's compositions were difficult not only for the orchestra but also for the audience. What is your view upon the matter?

I do not think his compositions are difficult, at least not the Rhapsody. The truth is that the orchestral suites get difficult at some point, and that the symphony also has some 'corners', some darker parts. It is more difficult for instrumentalists because the scores for chords, for instance, include many virtuosic elements. They have to study hard to make what they have to perform sound beautiful.


What could you tell us about the concert on February the 4th 2009?

It was a beautiful spectacle, and the audience was charmed with it. We performed the four rhapsodies (Enescu, Rachmaninoff, Gershwin, Ravel). It was very interesting and it was a real pleasure for me to have stood at the conductor's desk. I am looking forward to the evening of February the 5th, when we are going to perform the same musical program.


Are Enescu's compositions often performed in the United Kingdom?

To be honest, not very often. Still, he is surely not forgotten. He is appreciated for his elements of originality.


A last question: have you ever been invited to conduct an orchestra in Romania?

No, I have not come but I would love to. I will probably come with the Liverpool Orchestra. It is not 100% sure yet, but we plan to make a musical tour in that part of Europe.
Petra GHERASIM
Translated by Florentina Yvonne Penciu
MA student, MTTLC, Bucharest University
Return to archived Interviews