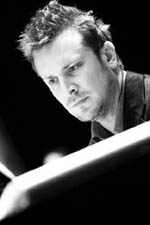 Friday, 20 March 2009 , ora 10.20
The feature length film The Rest is Silence, directed by Nae Caranfil received no less than nine awards at this year's edition of the GOPO Awards. One of the awards received was for best original music. French composer Laurent Couson, who signed the soundtrack for this film, agreed to answer a few questions, regarding this event. Here is what he had to say in an exclusive interview to Radio Romania Music.


How much does the GOPO award received for The Rest is Silence mean to you?

It's a great honour and I am very proud of having received this award. I am also glad that I could participate in the creation of this film. I know that its launching in Romania was a great event and I hope that interest in this film will grow worldwide, in the years to come. For a composer, making this film was a dream and a challenge at the same time, because it is difficult nowadays to find a long-reel in which the music suits the character, the action. This is a complete film, for which I was able to compose powerful and deep music. I am happy that the jury noticed my work and rewarded it.


How was the collaboration between you and the team of The Rest is Silence born?

I met Nae in Paris. We had the same Parisian agent who introduced us. Nae listened to several works of mine, I watched his movies. We decided to work together for his next film, which we did. It all happened naturally and our collaboration ran smoothly.


Is it the first time you composed the music for a Romanian film?

Yes. The Rest is Silence is my first Romanian film.


How did you find the script of the film?

Excellent script. It convinced me on my first reading, when I hadn't seen any image, yet. It is true that I had watched all of Nae Caranfil's films. I knew he was a very good director; I thought the script was brilliant and it was a true source of inspiration for me.


Which elements inspired you when composing? What influences can be retrieved in the compositions for this film?

Nae Caranfil is very passionate about the works of Ennio Morricone, so he often asked me to listen to his works. It is also true that I immediately told him: "I will not compose as Ennio Morricone did. I do understand what you need, but I will use my own style." This was followed by a few discussions on the matter; we tried to compromise between the romantic style of the movie and my personal style.


Which was the relationship between music and image? Did the soundtrack have any impact on the images, or vice versa?

I wrote the music on the final montage of the film, but I had begun composing some of the main themes after reading the script. I was already working on them before Nae made the film. The music we chose may have influenced him when making certain scenes. However, we only recorded on final montage. It was very difficult because I did this in a "60s" studio, without a chronometer, without the essential equipment used for adding the soundtrack to the montage. Still, I am glad I managed to overcome this challenge, as well.


Could you describe your collaboration with director Nae Caranfil for us?

It was excellent. It all went very well. We're on the same wavelength and we're passionate about the same type of films, the same music. It was obvious that everything would go well. This collaboration will continue and a few evenings ago Nae called to tell me that he would make a new movie soon and that his only "condition" was to hire me as a composer for his soundtrack.


What do you think about the impact of the movie both in Romania and France?

I cannot express an opinion on this matter; I do not live in Romania and I cannot answer to that. What can I tell though is that the Romanians living in France enjoyed the film a lot. There is an important community of Romanians in Paris, who take pride in this film, because it exceeds the clichés, the realistic and minimalist nuance of Romanian cinematography. I guess they are proud that The Rest is Silence can prove that Romanian cinematography is an ample and rich phenomenon, due to exceptional directors, such as my friend, Nae Caranfil.
Petra Gherasim
Translated by Andreea Banciu
MA Student, MTTLC, Bucharest University
Return to archived Interviews