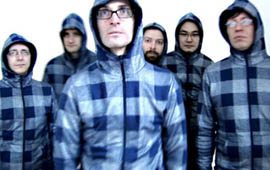 Thursday, 23 April 2009 , ora 10.28
The Endliche Automaten Laptops Orchestra, touring in central and south-eastern Europe, held two concerts in Romania, in Timisoara and Sibiu on April 23rd and 24th. It was then that we talked with Stephane Leonard, one of the founding members of the group, who told us more about this odd orchestra.


How did the Laptops Orchestra come to be?

In 2005 we decided to create a band where we could improvise. This is how we came to make music. Afterwards, we learnt to play by keys, by scores of various composers and to make our own ones.

It is about two years now that the group has changed, has reorganized and we realized that we are more than a group, more that an orchestra and we decided to have a proper name. The concept of Finite Automation Systems is derived from philosophy and of course from science. And it suits our music.


Do any of the members have a diploma in music?

Four of us have finished Arts, one Philosophy. Anyway, none has studied classical music. We would rather learn music by ourselves, or from one another.


How do you actually use the laptops as musical instruments?

We use very different computer programs which we often also design; and we create sounds with them. Of course, I am also referring to the sounds of classical instruments like that of the piano or of the drums. But sometimes, we just play with sonorities. There are many types of sonorities one can get. Some have been created by electronic means from the very beginning, if we think about the synthesizer, for instance.

I think that for a band or for an orchestra the most important aspect of all is their music. One does not come to visualize many orchestras because they are placed in the pit, one only hears them play. With a pianist, you do not actually see him playing; most of the times you just see a black carcass. The truth is that we appear as a very funny group for the audience. Especially since each of us is looking at different things and has different reactions, and moves in a different way.
Cristina Comandasu
Translated by Silvia Bratu
MA Student, MTTLC, Bucharest University
Return to archived Interviews