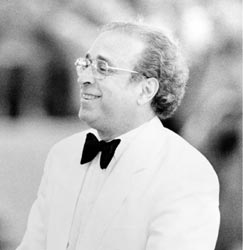 Thursday, 9 April 2009 , ora 10.41
On April 9th 2009, Lawrence Foster conducted another concert including one of Enescu's opuses, i.e. Symphony no. 1, in its programme. I grabbed this opportunity and interviewed the famous conductor again. He talked once more about his love for Enescu's music and about his projects.


Can you tell us why you chose this particular work signed by George Enescu (Symphony no. 1) for the concert with the Philharmonic Orchestra from Helsinki?

The Philharmonic Orchestra from Helsinki was also present at the "George Enescu" International Festival, which means that Enescu is not news to them and they actually enjoy this music. We also performed several pieces from Oedipus together, as well as some suites for orchestra. This concert represents the beginning of a cycle in which we will play all Enescu's symphonies. As you know, this year we chose the first one, we will perform the second one next year and the third one in three years. Everyone is enthusiastic about this project and, given the fact that I will turn 70 when this projects comes to an end, I will consider it my birthday present.


You are one of the best known promoters of Enescu abroad. What triggered this passion for the music of the renowned Romanian composer?

It was not a revelation, but a love which grew stronger and stronger. When I was young, I loved Bartok's music and, after a while, I discovered Enescu through Bartok. Noticing that everyone conducted Bartok's music, but no one conducted Enescu's works, I became more and more interested in his music, turning into a fanatic. When I became the conductor of the Philharmonic Orchestra in Monte Carlo, I decided to record some of Enescu's opuses. This way, I created recordings of the symphonies and a famous recording of Oedipus.


What other Romanian composers caught your eye over the years?

I have a lot of admiration for Pascal Bentoiu. I am also into some of Paul Constantinescu's works. I am interested in the works of Costin Cazaban, who recently passed away. As for the rest, I love Enescu's works.

Next season, I will conduct Symphony no. 2 at Gewandhaus, in Leipzig. Each season, I conduct at least one piece or two signed by Enescu. Anyway, I do not think I will ever conduct Oedipus. I have done it enough and it takes too much effort. I am happy though that both Oedipus and other opuses signed by Enescu are performed more and more often internationally. It is wonderful!
Andra Ivanescu
Translated by Andreea Banciu
MA student, MTTLC, Bucharest University
Return to archived Interviews