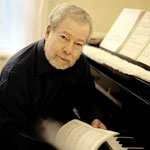 Interview with the pianist Nelson Freire

Thursday, 19 March 2009 , ora 11.03
Nelson Freire, the performer in the concert broadcasted live from Copenhagen on Radio Romania Music, on March 19, 2009, had the kindness to offer an exclusive interview to us. We talked about time spent among music and musicians and about the experience of singing in the New Concert Hall in Copenhagen.


It is an extremely nice place. It reminds me a bit of the Berliner Philharmonic; it is a very hospitable setting at the same time, it gives you the feeling of intimacy. I am very pleased with this.


Is this your first collaboration with the Orchestra in Copenhagen?

No, but it is my first collaboration with them here, in the new concert hall. Still, we have played music together many times.


Can you tell us a few words about the piece of music you will perform with these musicians on March 19th , 2009?

I am extremely happy to perform pieces of work by Grieg, a Scandinavian composer, together with a Scandinavian orchestra here. It really is a totally different thing. He puts so much soul in performing it...which inspires me a lot...


When you have performed this concert of music by Grieg, if we were to compare this with other events in which you have included it, is there anything special in this case? I am referring both to the concert hall and to the musicians...

...Grieg is a Norwegian composer, and if I happen to be in Scandinavia, I already feel something all the more special in the way these artists approach his pieces. They put so much soul in this. I felt this at the rehearsal especially in parts II and III; I felt I was experiencing a totally different world; it was perfectly inspiring. I could say the same thing happens to me in Poland when I perform Chopin's pieces with Polish orchestras. It is totally different. They put so much soul in performing.


You have worked and been on tours under the guidance of many prestigious conductors of the moment. This evening too, you will collaborate with another important figure in the field of conducting, the maestro Thomas Dausgaard. What can you tell us about this collaboration?

It is the first time since we perform together. I am very happy. He is an excellent musician and conductor...


He was the one who proposed the concert of music by Grieg for this evening to you?

I do not know who came up with the idea... Anyway, I will perform this very concert this year in Bucharest at the Enescu Festival in September.


We are looking forward to listening to you...

Me too, especially because I have enjoyed staying in Bucharest very much.


You are well-known for your interpretations of Frederic Chopin's repertoire. Might we call you one of the romantic pianists of the XXI century?

Of course, you might call me that. I will not feel offended... I feel I am a romantic or I have something that makes me return to this state of mind. I was born in a small town in Brazil. When I was a child, there was no television and we lived in that simple way we remember. I can say I was very lucky to live at that time. I think I have a romantic soul.


Are there any other composers who complete you as an artist?

Of course. Liszt. He is colossal. I am pleased to perform his pieces of work endlessly. And there are others too, and from different times: Mozart, Beethoven, Villa-Lobos, Debussy, Rachmaninoff, Prokofiev...there are so many music masterpieces...


Following your concert in Copenhagen, what is next on your agenda?

There will be a tour with the Danish orchestra in Spain, which starts next week, and, besides Grieg's pieces, I will perform Beethoven's works. I am looking forward to its start because it is also a pleasure to go to Spain.


Will you also record music?

I will record work by Chopin in July...his Complete Nocturnes. For next year I think, on the occasion of the Chopin centenary, I have scheduled the recording of his two concertos, with Riccardo Chailly and the Gewandhaus Orchestra in Leipzig.


Up to the present day you have been on almost all important world concert stages. Is there a place at this moment where you would like to go or come back to perform?

You know, it is quite recently, but it felt extraordinary to be on the stage of the Romanian Athenaeum. It is a unique concert hall...It is completely different. I was invited there by Cristian Mandeal some months ago. Unfortunately, he could not lead the orchestra, but I really lived there, in the guestroom. It has been an extraordinary experience. All one had to do was to open the door and enter the concert hall. In my opinion, it is a special and beautiful concert hall from the acoustic and architectural points of view. In 2007, I also performed a musical recital therewith Martha Argerich. Of course there are also other concert halls which I like very much, but one of these is the Athenaeum, a quite recent experience, and since I am talking to you... I would say it is one of my favorite concert halls.


Thank you very much...Since we have talked about your activity on the stage as a concert pianist, and you mentioned Martha Argerich too, who would be other recital partners with whom you are pleased to collaborate?

Truth is Martha is the only one. We have given lots of recitals and concerts together with the orchestra, we have made recordings, thus, when it comes to chamber music, I prefer Martha. We will perform at the festival this year, too. I also performed often with Mischa Maisky. I like to approach the chamber music repertoire, the quartets by Brahms, Schumann,... so many things to do and so little time ...


You are right ... so little time left since our meeting in Bucharest is so close.
Veronica Orha Canelea
Translated by Florentina Yvonne Penciu
MA Student, MTTLC, Bucharest University
Return to archived Interviews