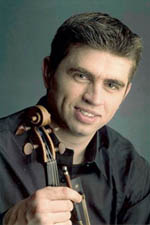 Thursday, 1 October 2009 , ora 11.07
Two renowned musicians - the violonist Remus Azoitei and the pianist Eduard Stan - are holding a series of recitals between the 1st of October and the 10th of December in famous European music centres, but also in Washington and New York. Their goal: promoting Enescu's work in the field of chamber music. Thus, the two performers will present to the European and American audience sonatas by George Enescu, as well as works by Johannes Brahms. We have discussed with Remus Azoitei about this project put forth by the Romanian Cultural Institute; he agreed to give us this short interview before his flight for Munich where he is to have his first recital.


What do you hope to accomplish with this series of recitals?

First of all, we want to promote Enescu as he is not that well-known outside of Romania; Enescu is, without a doubt, a musician who is not appreciated for what he is worth. Our idea is to present works by Enescu and Brahms. The two composers met in different moments of their lives. Enescu was only 18-19 when he played under Brahms's baton who was in the last years of his life.


You have chosen to play Enescu's Sonata Torso and the one "in the popular Romanian character". Why have you chosen precisely these two works?

Firstly, the Sonata Torso is quasi-unknown outside of Romania. This work deserves to be placed in the international music network and, therefore, we thought this sonata woudl be the best way to begin our programme. After this, we have prepared two of Brahms's sonatas of ample proportions - in A major and in D minor - followed by Enescu's no. 3 in A minor "in the popular Romanian character", a masterpiece which should be present in the programme of any Romanian violonist.


What is the itinerary of your tour? I know that you are playing not only in Europe, but also in America.


Yes, that is right. The programme presents fifteen recitals in great music capitals of the world - thirteen in Europe and two in the United States of America (in Washington and at New York's Carnegie Hall, on the 9th and on the 10th of December, respectively). And among the thirteen European capitals I should mention: Munich, Stockholm, Hamburg, Brussels, Paris (at the Salle Cortot), Madrid, Dublin; moreover, we will perform in Bucharest on the 25th of November at the Atheneum. So, as you can see, we have an impressive journey ahead of us.
Irina Cristina Vasilescu
Translated by Alina-Olimpia Miron
MA student, MTTLC, Bucharest University
Return to archived Interviews