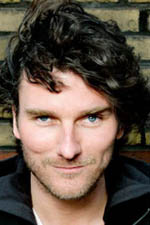 Sunday, 2 August 2009 , ora 11.31
On the 2nd of August 2009, in Bayreuth, as part of the 98th edition of the Richard Wagner Festival, the opera Parsifal will broadcast live. The director of this performance is Stefan Herheim. Stefan Herheim is a member of the young avant-garde generation of directors. He comes from a family of musicians and his goal is to produce as many opera performances as possible in the great theatres of the world. On Sunday, the 2nd of August 2009, starting with 4.50 pm, during the intermission of the live broadcast of Richard Wagner's opera Parsifal, you will have the opportunity to listen to the entire interview given exclusively for Radio Romania Music by Stefan Herheim.


How did you imagine the myth of Parsifal for the Bayreuth stage?

Parsifal is a child who is preparing to become an adult - a person who would know the cohabitation rules, who would be a social being. This is what I have tried to mirror in Richard Wagner's work - a transformation that we all must go through, full of obligations, of problems on a deep psychological level, but also on a social one, it is the transformation into a mature person who has responsibilities towards the society he is living in, but shares its ideals and ideas. For Parsifal is, from many points of view, a little boy whom I can compare to the young Germany Richard Wagner was living in when he wrote this opera, and which, in a prospective manner for us today, represents the evolution of Germany and the tragedy of the European history, through the infiltration and transformation of certain ideals of an ancient culture like that of the spirituality of Central Europe - what happened at a political level with the Weimar Republic and the crisis that followed the Second World War.


It therefore seems that you have chosen one of the most dramatic periods in European history.

The starting point of our story is set in the 1800s, more precisely in 1880, during the period when Parsifal was being written here in Bayreuth by the composer, in his house - Wahnfried. The story is thus set in a defined space - everything happens in the garden or around Richard Wagner's house, which the composer himself called Wahnfried - the house in which he was supposed to find peace in his old age - a place to reflect on his own life, his creation, on history and on Germany, a place of hope -as he wished to become a promoter of the new art which he called the art of the future. Visionary aspects regarding the content of this story and of his own life have been included in the libretto of the opera. Richard Wagner died one year after completing this opera. Therefore, starting with 1882 I have metaphorically traced the history of Germany up to the 1950's.


This staging was a challenge first of all for you and secondly, for the public. What about your colleagues, how did they react to it?

Very, very well. It was a huge success last year. The performance raised all kinds of questions which the audience did not answer at first. I do not necessarily believe that the purpose of theatrical drama or art in general is to raise questions that we then have to live with or negotiate with over and over again. These are important traits of humanity and we have to try to learn from them and from our own history lest we might repeat the great mistakes again.


Where does the staged story in Parsifal take place?

All the sets used for this story are a combination between architectural elements from Wahnfried and Festspielhaus on the Green Hill and I have also used elements which remind of Versailles. 1918 is the year when the war ended and the Weimar Republic was established. Versailles also was used as a hospital during the war. The soldiers, that is, the Grail knights in Parsifal, leave the temple, the Bayreuth Festspielhaus, to enter the madness of the war from which they return wounded and defeated and through their dedication they try to compensate the collective will mentioned by Hitler. Hitler has always identified with the heroes of Wagner's operas and in the history of Germany, he was in fact the one who converted art in general and Wagner's works in particular. This transformation of the art is not always in accordance with the principles of ideas and the philosophical dogmas that must be converted into reality, but they are always rooted into reality.
Irina Hasnas
Translated by Dorina Burcea
MA Student, MTTLC, Bucharest University
Return to archived Interviews