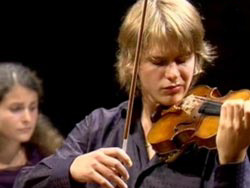 Sunday, 25 January 2009 , ora 11.34
In January 2009 a new CD of works by Enescu was released on the 'Virgin Classics' label. Besides the Octet for strings, op.7, in the orchestral version Enescu liked - recorded by the Monte Carlo Philharmonic Orchestra, conducted by Lawrence Foster, violinist Valeriy Sokolov also recorded, together with pianist Svetlana Kosenko, Violin Sonata No. 3 in A minor dans le caractčre populaire roumain, op. 25. On this occasion, the Ukrainian violinist talked to us about his recent recording, but also about the way he perceives the music of the great Romania composer.


In 2005 you won First Prize at the "George Enescu" International Competition. What can you tell us about this experience?

I entered this competition because the focus is not on the spectacular side of the performance, but on its quality and depth. It has been a valuable experience. Romania is a country with lots of good musicians, especially violinists. I also noticed that the Romanian public is very sophisticated.

No, but it was the first time I truly delved into it. I discovered it a few years before. One of my closest friends is a young Romanian composer and he revealed Enescu's world to me.


Why did you choose to include in your permanent repertoire the Sonata op. 25 "in Romanian folk style?"

Sonata op. 25 was a compulsory piece at the 2005 "George Enescu"International Competition. I had to choose between the Sonata and (the) Childhood impressions Suite. I chose the sonata, with the thought that I would later include it in my permanent repertoire, which I did. Even though I've been performing it for a long time now I always get the feeling that I can improve my performance, because each time I discover a new level, a new layer. I could say even that it is limitless in this regard.


How would you describe Enescu's music?

In my opinion Enescu is an exceptional figure. For me he is the kind of person you would have as example. I don't know if he was set on changing something, but that is what he did, at least for violinists. Through his works for violin he changed the interpreter's attitude towards his instrument, maybe even towards music. Enescu forces us to improvise, to use our intuition and imagination. It is curious because, on the one hand the notes on the score are very detailed. Every measure has indications for dynamic or character. At the same time, though, he is so open and so free.
His music also has an immense emotional value, of course. I would give as example here the beginning of the work Childhood impressions or the middle part of the second sonata. The latter, even though it is a work of his youth, it is hardly lacking in depth. Through these works, but through his Oedipus opera also, where his personality is that much more obvious, he proves he is a very important composer of the 20th century.
Andra Ivanescu
Translated by Alina Bucurel
MA Student, MTTLC, Bucharest University
Return to archived Interviews